Why Should Osei Kyei Bonsu, Akan Man Be Allowed To Lead Npp In Parliament For Four Consecutive Term?

By GhNational_News (self media writer) | 8 months ago

Why Should Osei Kyei Bonsu,Akan Man Be Allowed To Lead Npp In Parliament For Four Consecutive Terms? 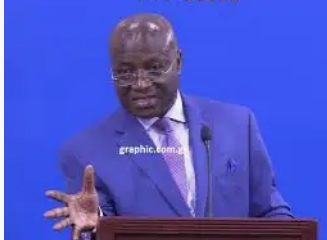 I have heard and read that the current Majority Leader in Ghana's Parliament, Hon. Osei Kyei Mensah made statements that it will be unwise for NPP to present another Akan person as a Presidential candidate for the 2024 General elections after Akufo-Addo.

In his analysis, he posited that because the NPP has presented Kufuor and Akufo-Addo who are all Akan men and they have all been successful as Presidents of the Republic, it won't be right to present another Akan person as a Presidential candidate irrespective of the competence of the person.

At this juncture, I would like all of us to pay a critical attention to this analogy.

NPP as a party has always presented Members of Parliament from different ethnic background since 1996. We have always had Northerners, Guans, Akans, Ewes, etc in Parliament since 1996.

Among all these ethnic groups who are all competent, he Osei Kyei Mensa Bonsu an Akan man has been the Minority Leader from 2009 to 2013. He lobbied and got elected again by the NPP to serve as Minority leader from 2013 to 2017.

An Akan man from Kumasi, Osei Kyei Mensa Bonsu lobbied again and got himself elected to lead the Party in Parliament as Majority Leader when the Party won power from the NDC in the 2016 general elections to serve from 2017 to 2021.

Was it 'wise' for the NPP to allow the Akan man Osei Kyei Mensa Bonsu to lead the party whiles there were other competent Members of Parliament who are Ewes, Northerners, Guans, etc?

Is it that the Akan man Osei Kyei Mensah Bonsu was affirming the notion that the NPP is an Akan party by being the leader in house for four consecutive times in the midst of other members from other ethnic groups? Or did he forget that he was an Akan man who has 'hijacked' the party in Parliament for 16 solid years? Or is it because it is Akan Man Osei Kyei Mensa Bonsu so it is alright?

Fellow Patriots, it is very important that our Elders in the party who should know better stop pushing ethnocentrism agenda in their personal interest. If we sit and look on whiles persons like Osei Kyei Mensa Bonsu break the front of our great NPP due to their selfish interest, it will not augur well for the future of our party. The most dangerous aspect of it is that the Youth may toe such line and that could be a recipe for disaster for our party and the country at large.

I am therefore calling on the leadership of the party to call persons like Osei Kyei Mensa Bonsu to order.

“I Expose My Bortos Because It’s Beautiful And I Don’t Want My Fans To Forget It”-A. Schwaznegger.