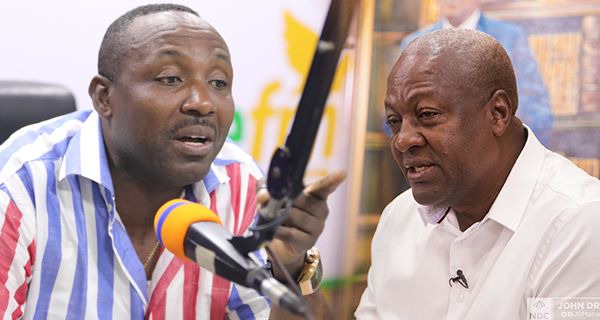 The general Secretary of the NPP government has descended heavily on the NDC flag bearer, John Dramani Mahama as he describes his attitude as hypocritic.

Recall, Mahama recently as part of his campaign policies hit the screen to promise Ghanaians to ensure that, all victims to the Ayawaso West Wagon by-election get compensated.

He made this promise when he made his way out to meet victims to the incident and their family members.

This was in response to claims and complains by the victims of the by-election. According to the victims, Nana Addo and his NPP government have failed to attend to them to compensate them despite Emile Short Commission's recommendation.

The NPP secretary, John Boadu touching on the issue at Neat fm descended heavily on Mahama as he described Mahama's attitude as Hypocritical attitude.

He further refered Mahama to when he was in power in the year 2012 till he was voted out of office by the natives. According to him, Mahama in his time of office did the same thing, he turned a deaf ear to victims of the same incident but now coming out to make commentaries and on that note can not understand why Mahama will have interest as an Ex president to help victims.

He concluded by urging Mahama to better stop his hypocritical behavior.

Let me hear you in the comment section, do you also see Mahama's attitude as hypocritical attitude.