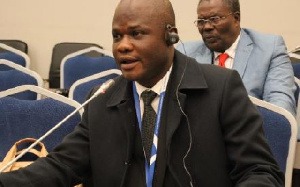 Member of Parliament for the Band, Ahmed Ibrahim said but the controversial Agyapa agreement would have been executed for the involvement of civil society groups and the Office of the Special Prosecutor.

He said that the majority of Parliament used its numbers to force through the agreement, much against the consent of the minority and the public, which he believes makes the 7th Parliament the poorest in the Fourth Republic.

Speaking to journalists in Parliament, the Banda MP specifically mentioned the former Special Prosecutor, Martin Amidu and President of IMANI Africa, Franklin Cudjoe as people who played pivotal roles in stopping the execution of the Agyapa Royalties Agreement which was passed by parliament to mortgage the mineral royalties of the country.

“This was the weakest Parliament that we have simply because we passed the Agyapa Royalties deal and Civil Society, Franklin Cudjoe and co had to stand up against it."And if not for Franklin Cudjoe and Martin Amidu, Agyapa deal would have been a thing now," he said.

Civil society was very critical of the agreement before during and after its passage through Parliament.According to the former Special Prosecutor, the possibility of corruption in Nigeria is high.

Content created and supplied by: Lyrical99 (via Opera News )