From Chinese Illegal Miners To NPP Women's Organizer: How Jinapor Is Winning The Galamsey Fight 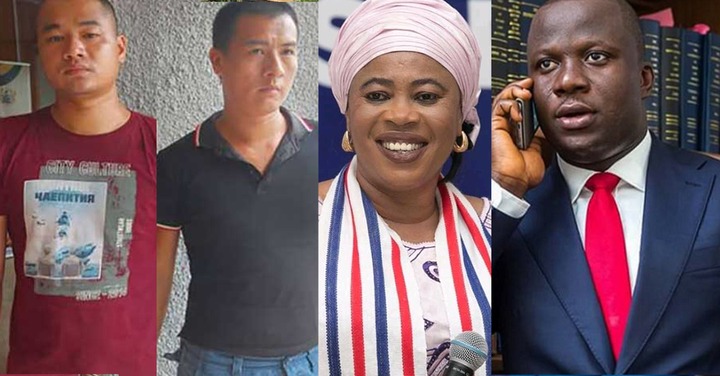 The fight against illegal mining in the country has been re-launched in full force. This was after the President, Nana Addo Dankwa Akufo Addo appointed former Deputy Chief of Staff, Samuel Abu Jinapor to serve as the Minister for Lands and Natural Resources.

The minister has since his approval instituted several measures to clamp down illegal mining activities in the country.

He has indicated that all mining activities in river bodies and forests cannot be tolerated. He has therefore described those places as red zones.

Following this, a military task force was deployed to the rivers and forest areas with a mandate to flush out all illegal miners.

The minister has cautioned that any form of mining on a river body must not be condoned. For some time now, the task force has left no stone unturned.

They have clamped down on mostly Chinese Illegal miners who were on the various rivers. Two of these Chinese illegal miners were arrested on the Pra River at Daboase in the Western Region.

Equipment including excavators and other mining machines have also been destroyed to serve as a warning to the illegal Miners.

Some locals have also been apprehended and had their equipment seized. The Taskforce deployed by the minister did not only end at the Chinese Nationals but have also hit hard at a leading executive member of the ruling New Patriotic Party.

Excavators believed to belong to its National Women Organizer, Kate Gyamfua were set ablaze. It is alleged that the mining site is licensed but the task force did not spare them.

These developments are clear signs indicating the minister, Mr. Samuel Abu Jinapor is serious about winning the fight against illegal mining with special targets on the rivers and forests.

For now, he seems to be winning the fight and has shown that irrespective of political colors, Ghana must be protected first.

Most Ghanaians have started applauding the minister for the various steps taken so far and urged him to continue until the turbidity levels in the rivers are reduced drastically.

Previous governments have made several efforts in the fight but the results were minimal. It is expected that Abu Jinapor will succeed. Let’s continue to support and pray for the new fight to succeed. Ghana will be better again.