How democracy can be ensured in Ghana

By BenjaminAbakah_02 (self media writer) | 8 months ago 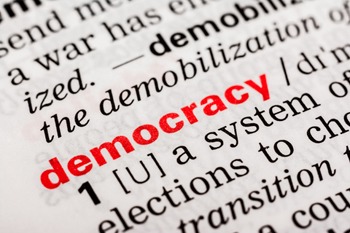 To ensure democracy, the doctrine of separation of powers should prevail. Separation of powers is a political doctrine in which the three organs of government, the executive, legislature and judiciary are made of independent of one another in terms of their powers, functions and personnel.

Democratic governance will be ensured by applying the principles of checks and balances, which is a political doctrine that expresses the need for each of the organs of government to exercise some degree of checks on the powers of the others in their functional aspects. This will ensure that, none of them gets out of control to infringe upon the rights of individuals, whose interest these organs exist to protect.

Tolerance of each other's views. Democracy also thrives on tolerance. Since there is the existence of different political parties with varied manifestos, there are bound to be different shades of opinions. This therefore, suggests that the government must tolerate the views of the opposition or minority and vice versa.

Democracy can be promoted through dialogue. There should be a discussion between the government and the opposition or minority, when there is a misunderstanding. This will help these two groups to resolve their differences, to prevent the escalation of the problem.

Intensification of political education. For democracy to gain grounds in a country, there is the need to educate the people on democratic issues. This will help the people to be in tune with the practice of democracy. This political education can be undertaken and intensified by the mass media, both electronic and print media, political parties, the National Commission on civic Education and other organizations.

The independence of the judiciary. Democracy will become rooted in a country if the judiciary is absolved from governmental and other influences. Judicial independence will enable judges discharge their duties without fear or favor. Judges will try cases with all the impartiality that they command.

The independence of the press is a necessary ingredient for the practice of democracy in a country. It is where, the press is absolved from governmental and other influences, so that, the press can be in a better position to criticize the ruling government constructively to keep it on its toes.

Content created and supplied by: BenjaminAbakah_02 (via Opera News )