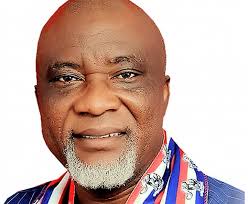 On September 28, Adorye said during an interview with Okay FM in Accra that the NDC had arranged for 75 Fadama boys to create the incident through the Chief Executive Officer of 3 Music Awards, Baba Sadiq, Larry Dogbe, and one Suhuyini.

Even though "all the bloggers in Ghana were present and streaming live," he claimed that the NDC engineered the jeers because of the biased footage of the occurrence.

The president was not initially scheduled to be there, he said.

The president was able to attend despite not being scheduled to attend since he had come a day earlier from the 77th United Nations General Assembly, he said.

He said Baba Sadiq was the mastermind, as he had learned the president would attend the gathering via the event organizers.

The trade or tourism minister was meant to address the crowd during the festival, according to the information I had, but the president visited one in South Africa and said he would be pleased if it came to Ghana. It was headed towards Nigeria." Due to President Akufo-involvement Addo's in the UN, one of the two ministers was expected to attend. But thankfully, the president was able to show up before the scheduled event day.

"He was spoken to, and it was decided that he would show up. Since Sadiq won three music awards

They spoke with him, and it was decided he would show up. When Sadiq of 3 Music Awards heard about it, he and Larry Dogbe and Suhuyini met there to make plans because he is a key figure in the business and has ties to the main organizers.

"Each of the 75 lads they hired from Fadama received GHC 120. The popular videos are proof of that. It came from a certain shot, "explained Hopeson Adorye.

When it came his turn to make a brief presentation, some of the audience started chanting and clapping, "away, away."

The president gave his address while maintaining composure. In a statement, Ernest Owusu Bempah, the New Patriotic Party's deputy communications director, charged the opposition National Democratic Congress with masterminding the scheme to discredit the president.

The NDC, however, has denied the charge, certain that the booing was simply a reflection of Ghanaians' dissatisfaction.