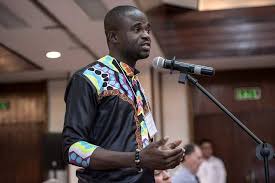 The Investigative and award winning Journalist, Manasseh Azure Awuni has finally breaks silence on the issue trending in the country about the former auditor General, Daniel Yaw Domelevo after president Nana Akufo-Addo finally details why he retired him from Office as auditor General.

The infamous journalist has stated that this is a pure logic that is planned to retired the auditor general from office based on his message put across today.

According to his post, Nana Akufo-Addo and NPP party's Logic was that when Mahama was in office as president, he appointed someone who is neutral or an NPP person but when he was leaving office, he chose to appoints some who owns allegiance to NDC and he might keep his eyes open on them, while knowing he is leaving office.

Manasseh Azure Awuni who people expected much to jab or have something much to say about the 21 pages letter from the office of the president, he just stated on his Facebook wall today that, he pray that God bless Ghana with another such leader who would also choose an auditor general who will be loyal to him when leaving office.

Well, may God bless Ghana with another such leader who would only choose an Auditor-General loyal to him when leaving office" he said.

6 Simple Ways to Lose Belly Fat, Based on Science