By Gamma (self media writer) | 2 years ago 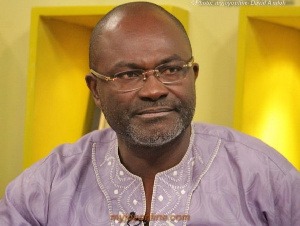 Most Churches these days are financial institutions set up to prey and deceive the vulnerable, that seeks truth, in a world enshrouded in lies. Honourable Kennedy Agyapong has waged a war on some pastors which he deems to be fake. These pastors have some remarkable followers and are very revered by their followers. They also have some noticeable financial muscles.

One noticeable thing however during his revelations of these alleged fake pastors , was his source of information which more if not all came from very close allies of the pastors, Obinim, Nigel Gaise , Mogpa . Former close associates disclosed very sensitive secrets which was bound to bring an imminent shame and dent on the pastors and the churches they represent. The 'beef' between the MP and Nigel Gaise saw Kakra Essien , a former junior pastor of Nigel , spill beans. He disclosed how the prophet slept with many women a day as part of his rituals to keep pulling crowd to the church. He also disclosed how the pastor slept with a media personnel Nana Romeo's girlfriend and even went ahead to snatch the lady from him which sources confirmed the radio personell affirmed. Kennedy Agyapong also alleged prophet Nigel Gaise wanted to kill him and had contracted some assassin's at railways to end his life, which they refused and were further pressed with a luring 10,000 Ghana cedis by the pastor but still turned down. While's this may be an allegation, which for some good reasons didn't come through, who could inform the MP of this plot if not close associate's of the pastor?. In his encounter with Obinim, Kennedy Agyapong made some startling disclosures which dealt a heavy blow to the International God's Way Church leader's reputation. Kennedy Agyapong managed to bring out bedroom photos of Obinim and also exposed audios which the 'man' of God appeared to suggest he could make one rich by performing rituals with new born babies and pregnant women. An expose which saw the pastor arrested and later bailed with a hefty sum. Again, Kennedy had access to all of these information thanks to some junior pastors of Bishop Obinim.

This article is not to suggest one shouldn't make friends. The Bible does say in Proverbs that a good friend is better than a far away brother. However one should be watchful of the kind of friends we make , ones who won't betray us when relationships turn sour as it's bound to happen in every relationship. Honourable Agyapong had information disclosed by former friends, it should inform one to be very discrete.