By MrsCelestial (self meida writer) | 26 days 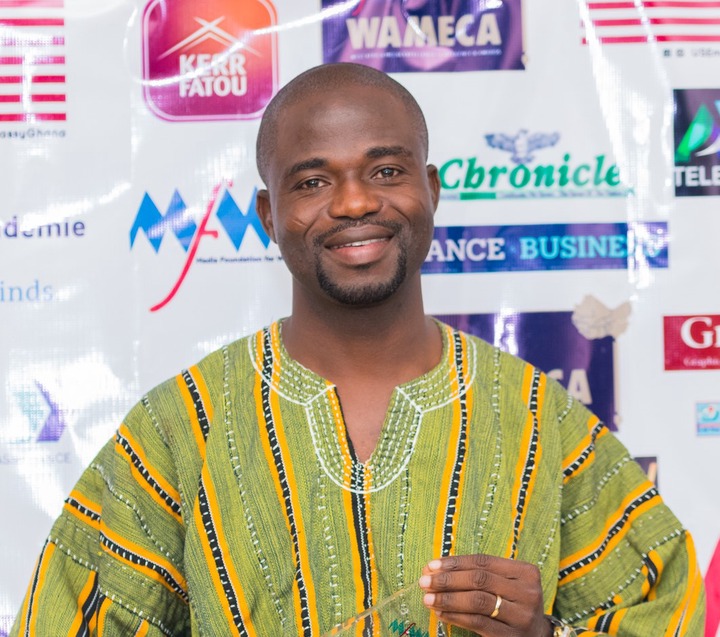 Manasseh Azure is no ordinary journalist, as he has genuinely won several awards, including the renowned GJA Journalist of the Year award before, aside several other international recognitions.

As a respected advocate against corruption, his individual fight has saved Ghana some thousands of cedis and even exposed the corrupt head of the Procurement Board, who has since been removed after his famed "contracts for sale scandal."

Interestingly, Azure's who severally bashed President Mahama, was hopeful that, H. E Nana Addo would do something different, but in his current opinion, he asserts that, he is even worse. This may not be surprising to people who have closely followed his line of assertion.

For instance, most recently when micro blogging site and tech giant Twitter announced their intentions of building a team in Ghana that will be the hub/headquarters for the whole of Africa in their activities in the region and despite the company explaining the reason why they picked Ghana ahead of other great African nations, as Ghana has become a champion for democracy, a supporter of free speech, online freedom, and the open internet, of which Twitter is also an advocate, during he, Nana Addo's tenure, Manasseh Azure literally snubbed Nana Addo as he rather saluted former presidents of Ghana. 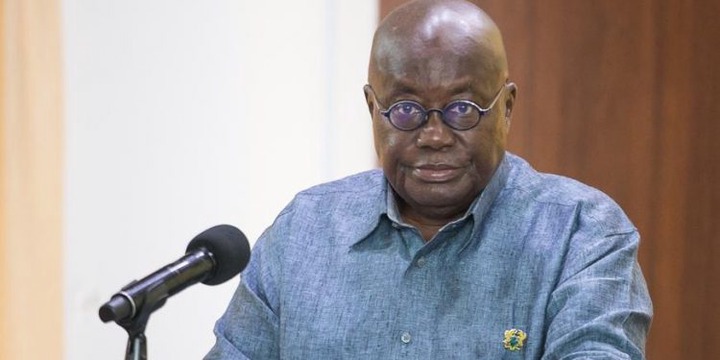 Manasseh reacting to the news snubbed Nana Addo and gave the credit to the three immediate past presidents of the country; John Agyekum Kuffour, John Evans Atta-Mills and John Dramani Mahama for their role they played in promoting ‘Freedom of Speech, as he wrote "Kudos to JA Kufuor, Atta Mills, John Mahama and all who have promoted free speech and made us attractive to the likes of Twitter."

Notwithstanding how this may sound bad, in my candid opinion, his latest blasting of the current president, may be his hardest bashing ever and clearly, he is disappointed in him, his leadership and even his record, sadly.

He writes in a post on Twitter that, "Mr. President, You cannot be calling yourself the Commander-in-Chief of the Ghana Armed Forces in a democratic Ghana while these barbarity and stupidity happen every day. Your hands are stained with the blood of the dead and wounded bcos you have refused to stop the brutality."

These are serious allegations by all standard, as he cites acts of stupidity been permitted now, accuses him of blood stained hands and eventually, asserts irresponsibility when he used the phrase, "bcos you have refused to stop the brutality." 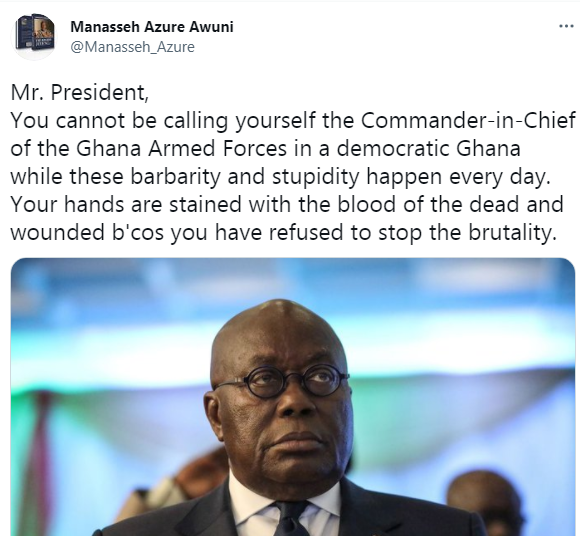 Commentary following his harsh post, have included the following:

@ahughton writes "very well said Manasseh. I must admit I'm very disappointed in our President. These brutalities if not checked could lead Ghana into civil war. This is the way it starts, small small..."

@AtiimLouis writes "I don't think it will lead to any civil war. However I think it may lead to a military take over if care is not taken because it obviously looks like the military is testing the waters before they take a deep dive.'

@AkosuaSarp writes "But now you use military man with uniform blue kiosk drinking. With the girlfriends at the salon even with government vehicles. I had a proof of my hairdresser that her boyfriend being a police officer comes to her shop @day, with 2 of them alone Always"

@GloriaSandra3 writes "So are you trying to say we should over look what's happening in the country because of his party? What he is saying is a fact even if u don't agree"

@JogSophist writes "Apparently, he was admiring the brutalities of the military in the early days of the '79/81 revolution. What is happening is just a playbook repetition of those era. What do you expect him to say when he's enjoying the show?"

@AkosuaSarp writes "Again my biggest concern are when the police RESUCE robberies who attack police, in less than 72 hours they’re caught. Not that alone has places 50k to anyone who help police to arrest Hakeem." #FixTheCountryNow

@Titus01238273 writes "When it matters them we the civilians help them out but when it involves civilians nothing is done...very sad!! I think we should think otherwise!!"

@NarteyOscar writes "How would he ever want to stop it when he believes that "All die be die" and propagates same?"

@john_lagbede writes "Masa, that’s not what he is thinking about ooo. Because he knows he is having a Jacuzzi in the sky, which will help him wash his stained hands." #Baafirapresident

@FFestud writes "If the Ayawaso West Wagon commission of enquiry reports recommendations were implemented, all these wouldn't have occurred"

@EAmenianpong writes "The guy is just a brutal leader, simple"

@AkosuaSarp writes "Again with this" 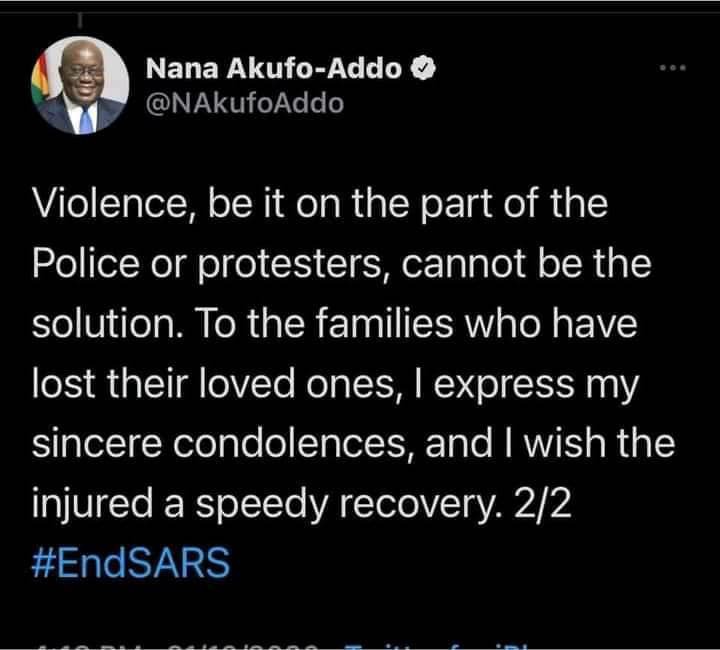 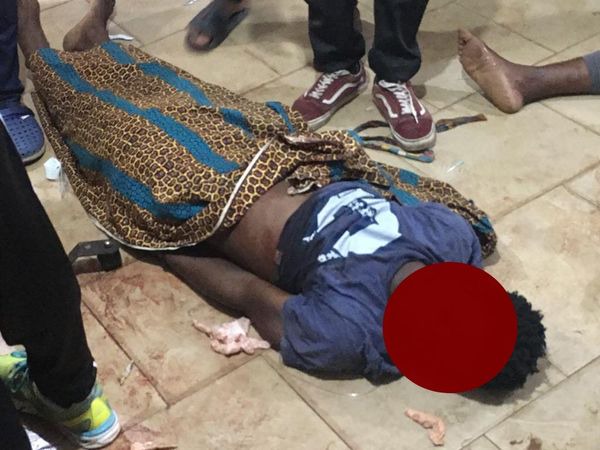