Yesterday, Ghanaians were dumbfounded at the millions of young graduate who thronged the El-Wak sports Stadium in the Greater Accra Region to go through the Ghana Immigration Service recruitment process. The situation appeared to be unbelievable as it exposed the high unemployment rates in the country; a case many have described as contrary to government's claims.

Earlier today, October 26, 2021, the Member of Parliament for Tamale North Constituency, Honourable Alhassan Suhuyini and former MCE for Akuapem North were interviewed by Johnny Hughes on TV3's NewDay show. It was a heated discussion as both sides sought to defend their opinions on the Immigration recruitment brouhaha. 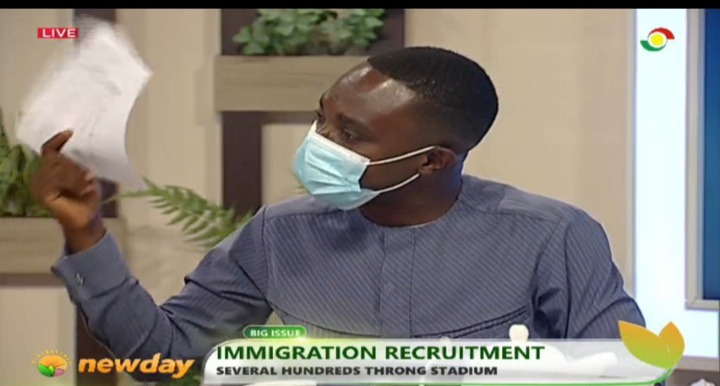 Honorable Dennis Miracles Aboagye mounted a strong defense for his party (NPP) and implored Ghanaians to remain resolute. He refuted the claims by opposition voices that unemployment is on the rise and lauded the government. He indicated that, the NPP government has proven to be a formidable force that Ghanaians can reckon with. He indicated that, the government has built 278 factories of which 108 are operational.

However, it seems his comment did not go down well with the NDC MP, Honourable Suhuyini. He registered his disappointment on the numbers that were captured at the stadium. According to him, the numbers in the pictures is a clear indication of the high unemployment in the country. He stated that, Akuffo-Addo government is the most dishonest government he has ever seen; accused the government for peddling falsehood about the employment situation in the country. He said, "You are defending a government that calls fertiliser distribution as jobs."