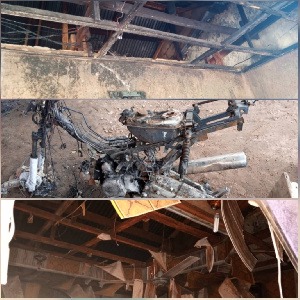 The NDC Constituency executive who is a teacher by profession, said he heard a knock on his window on Sunday dawn around 1:00 am to 2:00 am and decided to go out to see who the person was. He did not find anybody when he got out to the door. When he did not see anyone there, he decided to check by the window where he called.

Whiles approaching the window, someone threw an object suspected to be a stone at him but fortunately dodged it and took to his heels when he noticed his life was in danger. According to him, he started calling for help.

When the suspects realised that they could be made out, they stopped running after him and went back to his (Mr. Sansah's) house to set it on fire.

The Bole NDC constituency executive disclosed this in an interview on Nkilgi FM in Bole. He said he lost all his valuable items in his including his motorbike as a result but luckily his wife and children survived the arson attack.

When asked if he had a problem with anyone in the area for him to be targeted in such a manner, Mr Sansah answered that he has been living in Bole for the past two years and has never had any issue with anyone, stating that, aside the political debates, he is fine with everyone.

Whiles sympathising with the party's Deputy Organiser, the NDC member of Parliament for the Bole-Bamboi Constituency, Alhaji Yusif Sulemana, called on the Police to investigate and bring the perpetrators to book, adding that, he hope the attack was not politically motivated because if it is, it can serve a ground for reprisal attacks.

Content created and supplied by: Nana_K (via Opera News )