These Are The 1st, 2nd and 3rd Daughters of H. E Nana Addo, They All Have Different Mothers. DETAILS 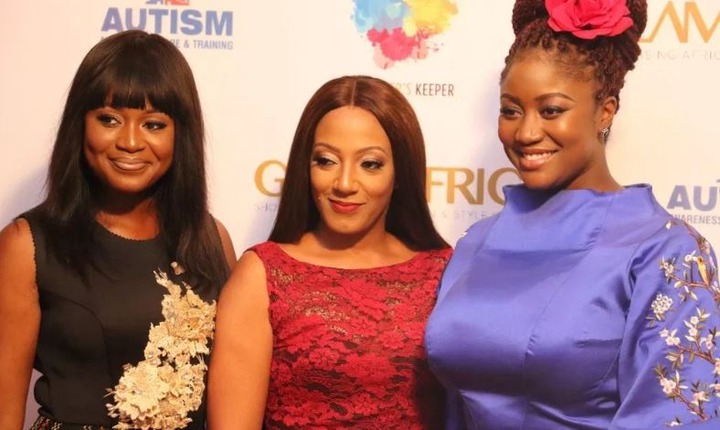 The President of Ghana, H. E Nana Addo, who comes from Kyebi, basting of both a royal and presidential background, had successfully made a name for himself, in the law fraternity, before pursuing forcefully, his own presidential ambitions.

After several attempts and failure at this, it is no wonder that, his last term as President, is happening now that he is 77years and interestingly enough, he is indeed, "the show man, of our time" and if you dare think I am lying, wait till he is giving one of his presidential speeches.

Well, with this ambience of vigor and charismatic communication, he must surely have been the darling of many pretty women as well, who may have loved to be in the presence of such a great man, by all purpose. Well, fast forward, three (3) of them, made it directly into his life, such that, the first three daughters of Nana Addo, were with three (3) different women as well.

Can we get to know them? Why not! 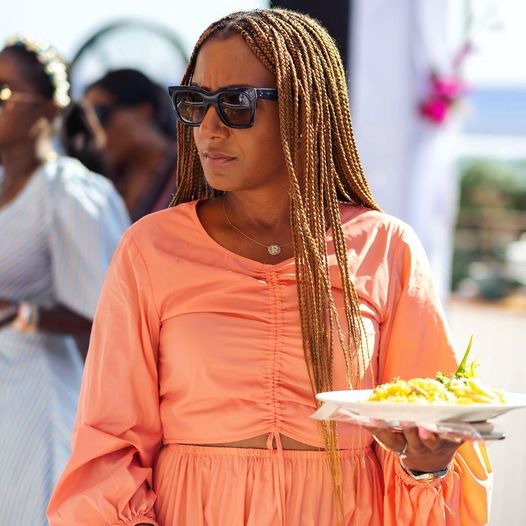 The first woman in his life, officially never got married to Nana Addo, as she only took seed and delivered the "half caste" Valerie Obaze, following after her biological mother, Virginia Hesse. Her mother, Virginia, interestingly never married or gave birth again and clearly, Nana Addo, must have had a special place, not just in her heart, but even more importantly, her entire life.

Both young Nana Addo and beautiful Virginia Hesse, were based in the United Kingdom and as fellow Ghanaians, they fell in love and this love led to other things and before they could think about marriage, viola, there was their baby, Valerie.

Fast forward, Valerie is 40years old, married to a Nigerian businessman named Stanley Obaze and they have been blessed with three daughters. Valarie, is a beauty entrepreneur in fashion and has received media coverage and publicity, from the likes of internationally renowned Forbes Magazine, Elle magazine, VOGUE, GQ, Essence, Glamour, etc. In fact, Forbes magazine hailed her, as an ‘African skincare trailblazer," as she started her R&R Luxury brand in 2010, just after the birth of her first daughter Rebecca Rose, from whom the brand takes its name.

She however, has a background is in Public Relations, which has been such a great help in building her brand. After graduating in Communications, Culture and Media, she first built her experience in PR working and interning with various music agencies including Bliss PR, Relentless Records and Warner Music before moving into the consumer PR at Brandnation and Boudoir. In 2008.

Two years ago, her firm took to Facebook to announce their presence at Kotoka International Airport's, Terminal three (3). The post read that:

*The doors are officially open at our newest store at Kotoka International Airport in Accra. Be sure to pass by if you’re flying out of Accra! You can stock up on skincare essentials before travelling (or heading home) and we can also help you put together authentic gifts for your loved ones!"

Interestingly, her mother Virginia Hesse, who is 77years this year, just as H. E Nana Addo, was appointed by H. E Nana Addo, as Ghana's ambassador to the Czech Republic from 2017, retiring in just the beginning of 2021, due to old age.

Prior to this political appointment, she worked at the Ministry of Trade and Industry in Accra, as a commercial officer and at the ministry’s diplomacy department also worked for a Swiss international firm as a project manager and later, for water supply and sewage treatment plants. Later on, she became the President of the Accra chapter of the women’s empowerment global non-profit, Zonta International. 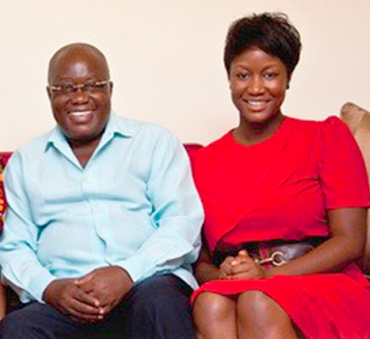 The second child of the President is Gyankroma Funmi Akuffo-Addo. The "Funmi" should give a clue that, she has a Nigerian background and this is rightly so. The first ever woman, who legally got married to Nana Addo, was a Nigerian woman. So many years ago, before Nana Addo could ever become a President and be selected as the President of ECOWAS, Nana Addo, had the West African sub-region in view, as he fell in love and actually married off his Nigeria girlfriend, with whom, they were based in France.

Her mother, Femi Atta, was just like Nana Addo, as she also had a political background. Femi's father was a leading politician in Nigeria, going on to become a Governor in a state, that is now defunct named as Kwara. She had moved to Paris, to school and work, where she fell in love with Nana Addo.

Their first and only child, Gyankroma Funmi Akuffo Addo, will later continue school in the UK. It is worth noting that, Nana Addo and all his children and women in his life, have an exceptional bonding and they all relate as one interestingly. In fact, many have even associated all the children for instance, with the First Lady, whereas, she is just their step mother.

Well, Gyankroma, will eventually become the Director at the Creative Arts Council, an initiative of the Akuffo-Addo government, to help boast the arts industry, as she was appointed to this position, by the then Tourism Minister Catherine Afeku, during Nana Addo's first term. Gyankroma Funmi Akufo-Addo is now concerned with beautifying the streets of Accra, as she brings together artists, to paint the streets.

The Presidents will also go on and get divorced to Femi Atta, but interestingly, employ her divorced wife's direct junior sister named, Saratu Atta, as his Personal Secretary/Executive Assistant, at the Presidency.. 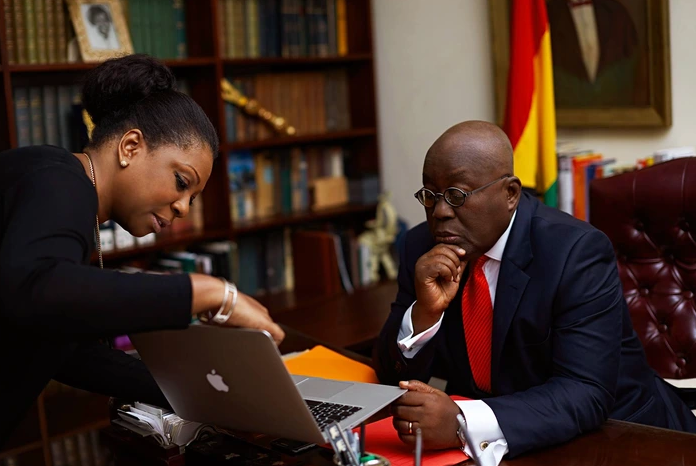 H. E Nana Addo with the junior Sister of his First Wife, Who he appointed as his Executive Assistant

One of Gyankroma's famed achievements, was the fact that, under the auspices of the Council she leads, she literally facilitated the ‘Arts for All’ project which saw interchanges within Accra decorated with beautiful paintings. The Council, inaugurated in 2018 and was made up of Mark Okraku Mantey, Gyankroma Akufo-Addo and Bibi Bright.

Interestingly, whereas the President's second born, Gyankroma Funmi Akuffo Addo is still at post as the Director, Mark Okraku Mantey has become the Deputy Minister of Tourism (supervising the government's creative arts industry initiative), whiles its unclear, if Bibi Bright is still at post. 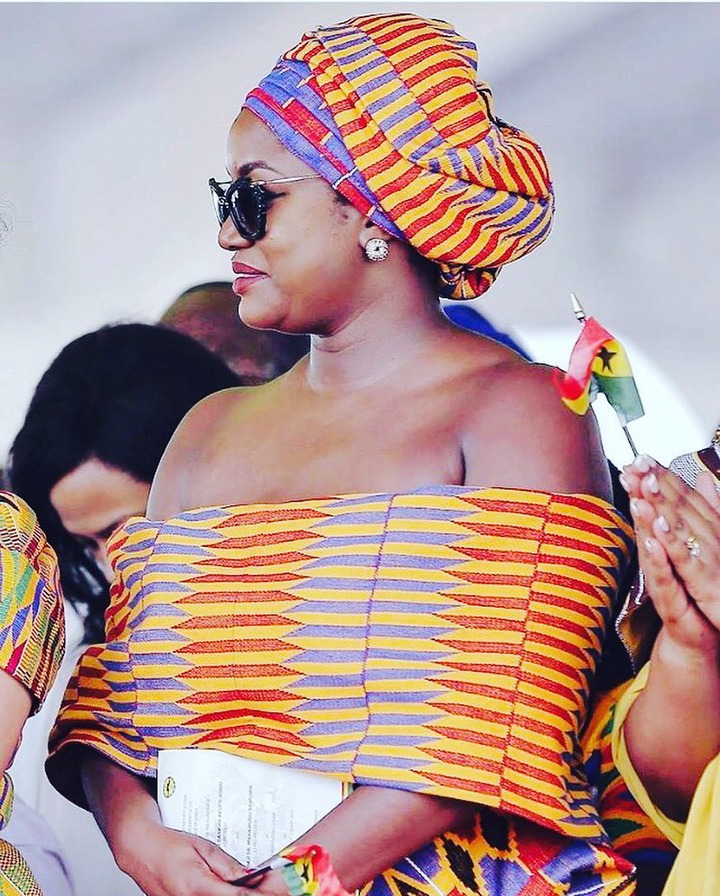 Beautiful Edwina Akuffo-Addo, Third Born of Nana Addo and her mother is sadly passed on.

Nana Addo, after the divorce with Femi Atta, then married Eleanor Nkansah Gyamenah, (popularly known as Obaa Saa, in 1984. She was an entrepreneur and was from Ashanti Mampong and a royal in the Ashanti Mampong traditional area) with whom, they will also have another daughter, the third in the life of Nana Addo, named Edwina Akuffo Addo.

Their marriage, this time around, did not end with a divorce, but even more sadly, by the icy hands of death, as she passed on, in the early 90s where she suffered from Rheumatoid Arthritis.

Edwina Akufo-Addo, like most of children of Ghanaian politicians, along with her older sister, Funmi, had her secondary and tertiary education in the United Kingdom, where she attended La Sainte Union Catholic School in London.

Edwina Nana Dokua Akufo-Addo, is also an entrepreneur and though what she is currently involved in is barely known, she once managed her own clothing store, named Eleanor’s Closet in Osu. This shop was opened in 2012. The shop, which had a tag line, "out of Paris," provided high-earned top designer and bespoke wear, to some of the leading female celebrities at that time, such as Jacqueline Appiah and several others, as her shop, targeted the upper class in society.

It is worth noting that, these three daughters are the closets in the family and it is no wonder that, the three, are the directors of their own humanitarian Non-governmental Organization, named "My Sisters Keepers", as in 2017, Valarie Obaze, Gyankroma Akufo-Addo, and Edwina Akufo-Addo, with diverse experiences and skills, came together to put the spotlight on autism and support scores of children on the Spectrum, cared for at the Autism Awareness Care and Training Centre (AACT) in Accra, through their foundation My Sisters Keeper.

Glam Africa Magazine had on Thursday 29th June 2017 partnered with My Sister’s Keeper Foundation to host ‘Glam Africa Ball‘ to raise a targeted GHc 250,000 ($70,000) to support the project. The funds were raised through dinner tables at the glam event, auctioning items including outfits from the Nineteen 57 by KOD clothing line, Modella B fashion, paintings from the Autism Awareness Care and Training Centre, artwork from respected Ghanaian artist Kofi Agorsor as well as a brand new vehicle courtesy of Svani Motors which was raffled on the day.

The funds raised was to be used to improve the lives of children with ASD being cared for at the Autism Awareness Care and Training Centre, run by Ms Serwah Quaynor, giving these children a new breath of life and hope, as well as to raise much-needed awareness for ASD.

Glam Africa’s CEO, Chioma Onwutalobi, in her opening address, had then advised the guests to take part in creating Africa’s narrative, she added that “Glam Africa strongly believes that Africa needs to create its own narrative, we need to tell our own story to the world … we are proud to be one of those media platforms championing this movement”

Bank of Ghana sends strong warning to all Quickloan defaulters.