Which African Country Is Next In The Coup Saga: Reactions As Guineans Rejoice Over The Coup

By Wysopera (self media writer) | 4 months ago 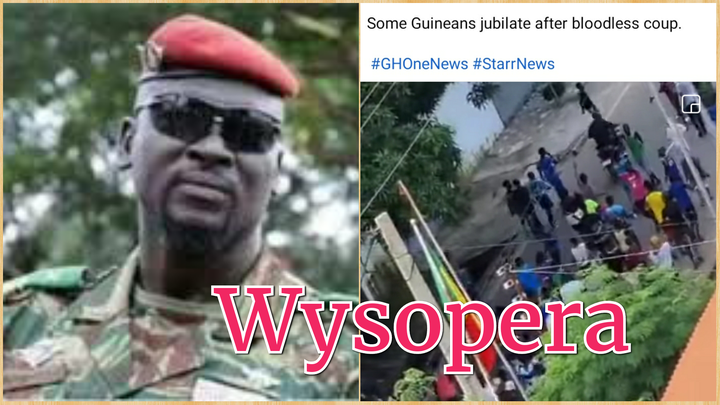 At the mention of the word coup, many fear because of the past memories of its accompanied bloodshed and tears. When coups occur, many tend to blame the leaders of the coup for the fear and panic that they could have initiated among the citizens in the country.

Coups have been the norm before countries around the world began to accept and tolerate democracy with the intention of accepting everyone's view in decision making. The change from military rule to civilian rule gradually took over, and most citizens throughout Africa begin to appreciate the power of democracy.

However, it seems that individuals always have a way of taking advantage of the loopholes in every set down procedure. When this happens, the very reason for which these procedures are laid down would be defeated leading to the chaos that it was supposed to prevent.

GHOne TV has displayed on their Facebook page a video of the citizens of Guinea jubilating after the take over of power by the military. Many Ghanaians reacted to the video with different opinions.

The manner in which the people of Guinea have embraced the change is something to be looked into. What are African leaders doing that could orchestrate this atmosphere of coup that even the citizens are happy about? The fact that the coup is even peaceful is something that could ginger citizens of other African countries to embrace it. So, which African country could be next?

Some facebook users' reactions in respect to the development portrays that many are beginning to accept the current development. They have expressed the fact that since the citizens of Guinea are happy, it means that the leaders were actually corrupt and therefore deserve the change. Chaa Mola has expressed that the people are free now.

As some Ghanaians are also calling for such a change in Ghana, others claim that the military rule would bring out no positive results in the country.

Do you think that this could become a trend in Africa?