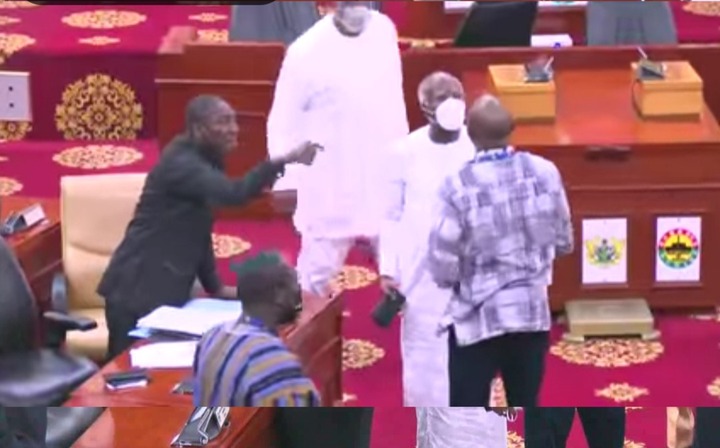 It was a hot exchange of words in Parliament as Parliamentarians from both sides of the house debated a complaint brought up by Deputy Majority Leader, Afenyo Markin. It can be recalled that a day earlier, the MP for Effutu had made certain comments regarding why government economic plans needed to be passed.

According to Afenyo Markin, Ghanaians are calling for stranded Ghanaians caught in the Ukraine-Russia crises to be evacuated and yet fighting against policies that will generate revenue. He noted indirectly that the E-levy could have been a source of revenue. However, in Parliament yesterday, Afenyo Markin denied making such claims of e-levy revenue needed to evacuate Ghanaians. He appealed to Speaker, Andrew Asiamah Amoako to get Joy News to pull down the story regarding that.

However, this was challenged by Muntaka Mubarak, Minority Chief who argued that the MP from Effutu did indeed say that the e-levy was necessary for the evacuation. This angered Afenyo Markin who explained that he felt appalled that his fellow MP will say that. According to him, Muntaka has been complaining for years about suffering from ill reportage and so though he will be the last person to implicate another MP in the same way.

Afenyo Markin noted that he was waiting for the day when ill reportage will come up against Muntaka so he refers him to what he did to him. Afenyo Markin was so frustrated that it had to take other MPs to calm him down. According to him it was unfair for a media house to misrepresent him in that manner.