EC Blasted, As It Says 2020 Elections Staff Have Been Paid Finally, As Many Complain Bitterly. 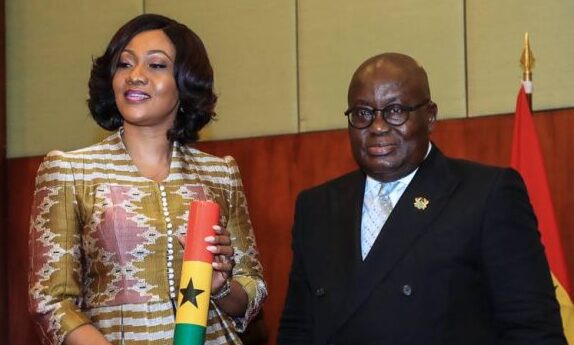 The Electoral Commission, once described by Manasseh Azure as "ERRORtoral Commission," may have finally absolve its self from public radicle and its own promise and fail, as it has announced officially that, its 2020 general elections staff have been officially paid.

the most recent of its communication on the payment of the temporal staff, who assisted in the just ended elections, which had been largely overdue indicated that, "The Electoral Commission has assured that its field operatives who assisted in the conduct of the 2020 general elections will receive their full allowances by the end of April 2021," as the Commission in a statement said it was working with the Ministry of Finance to ensure that the payment is done by the end of the month (and this was on 6th of April)

While expressing its regret about the delay in making payment for the services of the field operatives during the elections, it expressed its appreciation to the personnel for their hard work in making sure the election came off successfully. 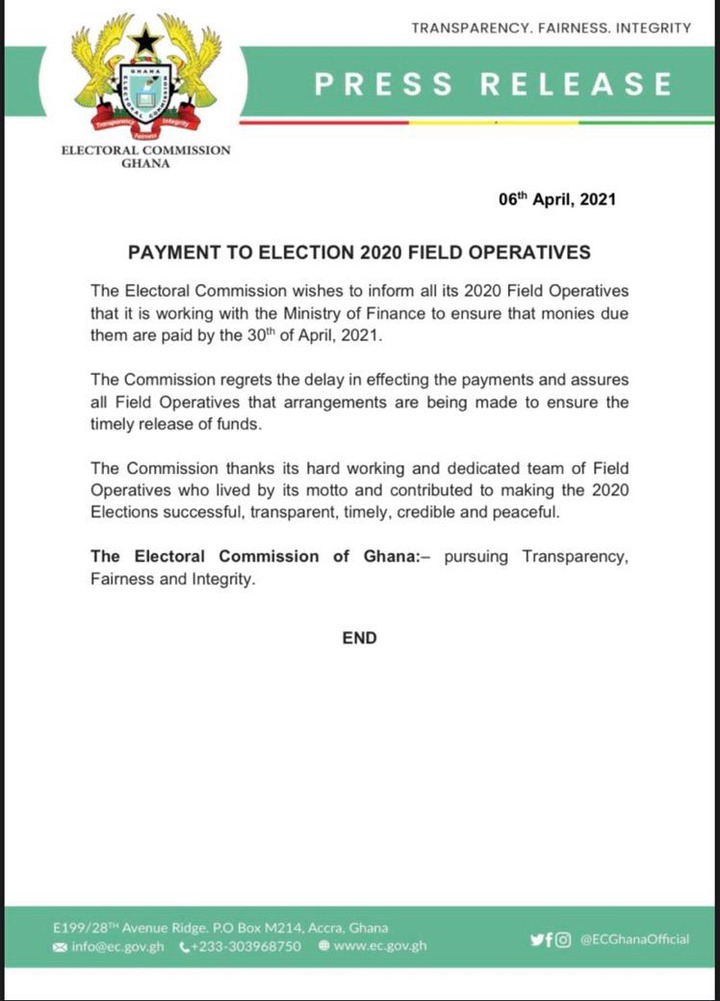 The statement of the Electoral Commission came a day after viral news reports came that, some of the contracted workers were lamenting that they had not been paid more than three months after the elections.

One of the contract workers who spoke had said, “before December 7, we went for training, we applied and some of us were called, others were not. They said after one month and latest by the end of December we were going to get our allowances. After we finished, they asked us to fill the forms, and on some occasions, they called us to come to the office to confirm our bank account details, among others. We thought by February it [allowance] will come but to date, we have not been paid.”

Some of those recruited as temporary staff to help in the 2020 elections served as presiding officers, verification officers, name list reference officers, COVID ambassadors and ballot issuers.

"The Electoral Commission (EC) has paid in full, all 236,000 field officers who assisted in the conduct of the 2020 general election.

Dr Bossman Eric Asare, the Deputy Chairman of the EC in charge of Corporate Services, who disclosed this in an interview with the Ghana News Agency, said the last payment was made on Tuesday, June 08 and that the accounts of beneficiaries would be credited by Thursday, June 10.

“Just as it happened last time, the accounts details of some people were not correct so if anyone does not receive the money they need to present their details again,” he added.

Dr Asare thanked the field officers for their patience and also the meritorious services, ensuring a successful exercise" it stated. 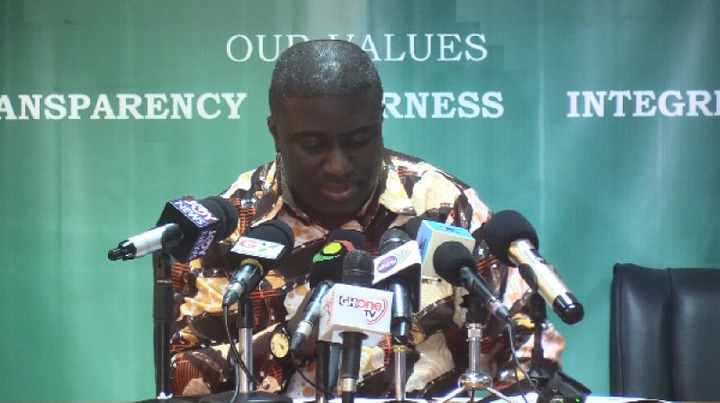 Netizens have taken to the official page of the Commission on Facebook and have been responding to this update and sighted interesting responses include the following:

Hon Ebo Francis Bawumia writes "Please I have work with the commission 2019 as exhibition officer but still haven't received my allowance. Please some one should help me out"

Douglas Nartey Nannor writes "Our honourable EC please next time don't be quick to post online, make enquiries from the banks if successful payment has been done to save yourself from insult. You posted profit you save the country meanwhile by then you had not paid your field workers. But I no profit is declared when you deduct all your expenses so next time check those things first."

Kwesi Osei Breman writes "Yes! The money has been paid. My sister in-law was part of the 2020 election field officers for the EC. She has confirmed receipt of payment."

Charles Herbert Smile writes "They use the money for Investment and treasure bills before considering! 6 months aden, I thought budget was allocated for the exercise before it kicked start"

Benjamin Kabore writes "EC this is a big fallacy. So far as those at the rural bank haven't received our allowances, means u are not up to the task. Is it that you have made payment to the banks and they are using the money to get profit or u are just throwing dust into our eyes"

Nana Boakye Yiadom Nby writes "Not all.... Those of us in Tano North and South GCB have not been paid"

Yaw Kyere writes "Some of us are still waiting for the allowance of 2019 exhibition of voters register for district assembly election. When is that going to be paid?"

Nestacity SMART Ventures writes "Shame !you are happy saying you have paid field officials after 6 months of shouting and hooting at you."

Papakyi Yankey writes "So we at GCB de3 we should urinate and sleep bia? The EC should get serious. 6 months after the election and we haven't been paid but the President, Ministers and MP's have been taking their salaries and allowances till now. Wow GH my motherland"

Ayuba Ibn Iddriss writes "Electoral Commission Ghana Do your checks well, in Northern Region GCB is yet to credit the accounts of field officers"

Winifred Gracie writes "What of the 2019 unit committee and district assembly elections? I haven’t been paid a year and 6 months on"

Tamatey Emmanuel Lakawana writes "All be lie, no official with rural bank account has been paid yet , even GCB in Somanya is yet to pay. Lets stop that propaganda and think right. Paying few and leaving majority doesn't mean you paid all officials. This is the first time in Ghana's history that Election officials are yet to be paid even after 6 months after the Election.

Sam Aku Kelly writes "We those in GCB in Northern region have not been paid. You are lying, stop the lies."

Jah Atiiga writes "They should stop that lies and pay us our money before thunder n lighting stretch them. Since when did they started paying and they are there making noises"

Stanley Tetteh Nanor writes "EC which people did you say you had already paid because everyone is saying that you haven't make any payments to them, so now who's lying?"

Noah Nana Kwadwo Asare writes "Has anyone saving with Ecobank received his or her allowance?"

Perry Pinto writes "So we should sing praises right? Mo mfiri ye so.. It's been six months now after the elections and you are now paying your field workers, are you not ashamed?"

Nii Mantse Kwame Larbi II writes "It’s a big lie. Madam when was the payment done? Because I just check from my bankers and nothing has been paid"

Alhassan Iddrisu Tabkoha wriyes "How many times do you want to pay them on this platform? I thought you said you paid them some six weeks back?"

In concluding, it is worth noting that, the several other hundreds of comments, all complained in the same manner that, they have not received their payments and blamed it on incompetence of the EC Chair and Commission members, who they blamed, for not showing leadership in dealing with their challenges.

This is also coming on the back of governments decision by the country’s parliament to award £2,500-a-month salaries to the wives of the president and vice-president as the country faces economic turbulence.

Ghanaians have reacted with fury over the this and the decision, which several MP's believe was hidden to them when they approved the emoluments report, have since been sued in court. 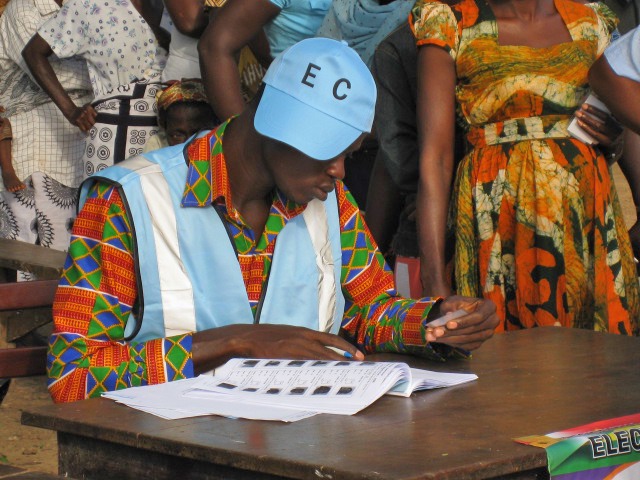