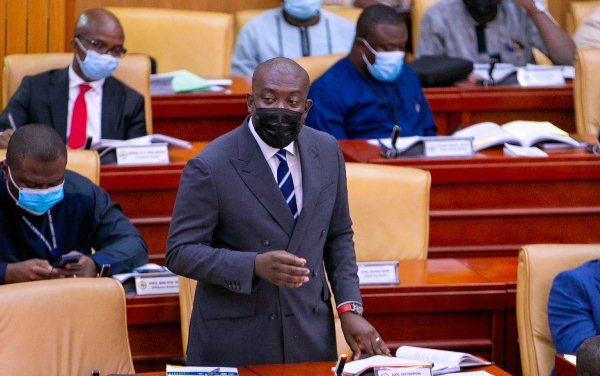 Members of Parliament (MPs) must also be willing to accept pay cuts as a way of contributing to the country's development, according to Information Minister Kojo Oppong Nkrumah.

The lawmaker from Ofoase Ayirebi has stated that he is willing to introduce a motion in Parliament to that effect.

"I believe the legislature should also consider a pay decrease." The executive is trying to decrease salaries by X percent; perhaps we Members of Parliament, and I will be pleased to move a motion in parliament to suggest that they consider taking a salary cut to help us achieve our goals.

"That's what gives you the moral authority to urge everyone else in the economy to do the same thing."

All of President Nana Addo Dankwa Akufo-appointees' Addo's wages have been lowered by up to 30%.

According to the Presidency, this is one of the actions taken by the government to address the country's current economic issues.

The President told the public that the Minister of Finance, Ken Ofori Atta, will announce the government's plans to address the country's current economic issues.

On Tuesday, March 22, Mr Akufo-Addo stated this during a meeting with members of the Council of State at the Jubilee House in Accra.

"On Thursday, the Minister of Finance will have a huge interaction with the nation, where he will be in Washington," he stated.

"Even Akufo Addo Has Only One Vice, Why Three Deputies" - Former NPP General Secretary Laments

Popular Ghanaian Pastor In Spain Sends Strong Message to both NPP & NDC, Reveals Who Is Most Corrupt

How to use soursop "aluguintuguin" to treat cancer, Insomnia, control inflammation and diabetes

Had I known Is Always At Last, Ghanaians Descends On Prominent NPP Member Over His Words Against IMF

Check out the advantages of natural spices over artificial spices.

SO EMOTIONAL; Captain Smart Cries Like A Baby On A Live Show