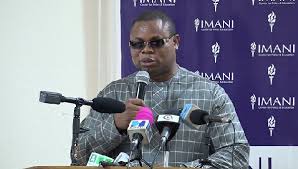 The president of policy think tank group IMANI Ghana, Franklin Cudjoe has sent another important to government after minority in parliament reject 2022 budget. He has stated that the rejection of 2022 budget should lead to a re-examination of the pre-budget engagement process as they were only engaged in one day ahead of reading the budget statement in parliament.

He said not much could have been achieved both ways because the time given to them is too limit to go through everything.

According to Franklin Cudjoe, this was the first time though as previous engagements have at least been done two weeks prior to the reading.

He told government that it is important for pre-budget consultations be done at leat one month before the presentation in Parliament. "Most important is for Parliamentarians to have about the same time to make inputs in order to avoid such scenarios" he told government on his social media wall today.

Franklin Cudjoe's message sought to explain that if government could have made the right decision and engagement, minority in parliament will not reject the budget. He could also mean that government has taken Ghanaians for granted by doing their own thing which the public is not ready to accept but want to force it through majority means but the smartness of minority MPs changed everything on the day.