"What If A President Has 20 Wives"-Kwesi Prat Quizzes

By Giinagh.com (self meida writer) | 22 days

It has now been established that the spouses of the president and vice president would now given monthly remunerations equivalent to the salaries of ministers. The matter has since been generating a lot of public controversies among well-meaning Ghanaians as almost all citizens have taken their views on the issue. Though some people commend the government for taking this step since the first and second ladies have charity organizations they sponsor, majority of Ghanaians have kicked against it and describe it as danger to the tax payer.

Mr. Kwesi Pratt believes that there is nothing that prevents or restricts the president or vice president from having twenty or more wives and so all these presidential spouses would given monthly remuneration. A move he vehemently condemns.

And in that case, each of these twenty wives would be entitled to a salary equivalent to that of a minister's salary. Relating it to the fact that former heads of state, he said unless it is made for only democratic heads of states, former leaders like; Kutu Kwesi Acheapong, General Ankrah had more than one wife and these spouses of former heads of state would also be given these salaries is outrageous.

According to him, such issues do not even call for a debate in parliament but should be thrown away since it is an illegality. "Wives of presidents and vice presidents are not part of the Article 71 office holders, so such a move is an illegality. Rights come with responsibilities, will the presidential spouses also declare their assets as the constitution requires for Articl 71" holders? He asked. 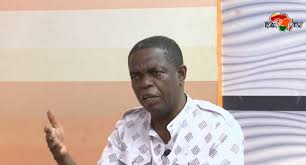