Ningo Prampram member of parliament Samuel Nartey George popularly known as Sam George has described how he and some of his colleague Minority Members of Parliament narrowly escaped deadly highway robbery attack on Wednesday November 24. 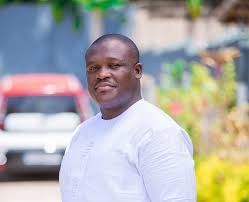 In the picture is the member of parliament for Ningo Prampram Honourable Samuel Nartry George.

According to the lawmaker, the incident happened when they were on a voyage to Sampa on the invitation of the Omanhene.

The armed robbers who took merits of the cover of darkness, kept several commercial and private drives and passengers hostage and robbed their victims.

“We were on our way to Sampa and around Mankraso, we bumped into seriously armed highway robbers who had seized the road and were robbing.

The sound of the engines from the powerful vehicles of the MPs were not enough to scare the robbers who opened fire on the Member of Parliaments.

The security detail of the member of parliaments seeing the impending danger also returned fire.

The robbers sensing the impending superiority gunfire from the end of the security Personnel's, took to their heels from the crime scene using the nearby bushes as their exits.

Ningo-Prampram Member of Parliament Samuel George Nartey took to social media to offer praises to the Almighty God for coming through for him and his colleagues and requested for the police to be provided all the needed support to fight the armed robbery menace especially as Christmas approaches.