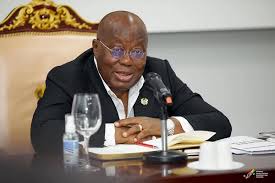 President of Ghana and Leader of the New Patriotic Party (NPP), Nana Akuffo-Addo say the National Democratic Congress (NDC) needs longer time in opposition to organize their party for the future of Ghana.

According to President Akuffo-Addo, the NDC does not seem ready for election 2024 as they are yet to elect executives to lead them into the forthcoming election.

He says as a party in opposition, with very little in their plates, it is expected that the NDC would have restructured their party by now and get its battle ready for 2024.

“The NDC have to spend more time in opposition so they can organize themselves better for the future of Ghana than what they are today”, he said.

‘’I’m surprised that the ruling party was the first to take initiatives to reorganize because you would have thought in these matters it will always be the opposition who will be first to reorganize themselves, but we have completed ours and they have just begun”, he further explained.

He again says even the reorganization of the NDC which has just begun at the grassroots level has been marred by violence and chaos.

He says there is always going to be a difference between the NDC and NPP relative to how the two parties organize themselves internally.

While the NPP goes about its internal process in a decorous and dignified manner the NDC’s is always characterized by chaos, he says.

“There’s always going to be a contrast between this party (NPP), a national party responding to the issues across the country, which goes about its internal processes in a dignified and decorous fashion, but with purpose. The renewal of the party’s structure that we have seen tells you of a party that is ready for the big battle in 2024”, he said.

The President adds that he is confident his party will “break the 8” to retain power beyond 2024 because of the good works of his government.

President Akuffo-Addo made these remarks in an interview with the Radio North Star in Tamale as part of his 3-day working tour of the region.