Akufo-Addo Should Be Grateful To Rebecca; 'I Am In A Hurry' Mantra Could Have Failed- Vim Lady

By Blind_Justice (self meida writer) | 17 days 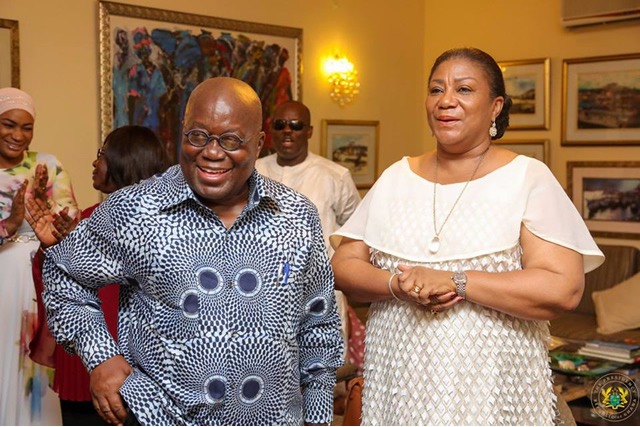 President Nana Addo has been admonished to expressed hinprofound gratitude to the First Lady, H.E Rebecca Akufo-Addo for saving his political ambition when the New Patriotic Party (NPP) tool office in 2017. According to Afia Pokua, alias Vim Lady, there could have been nothing better to ignite the passion of the President's mantra 'I'm in a Hurry'; if the First Lady had not initiated the Mother and Baby Unit at the Komfo Anokye Teaching Hospital.

She shared that despite H.E Rebecca Akufo-Addo not being a member of the President's Cabinet nor a public official, her accomplishment in the very first year of the President's tenure supersedes any other minister. She corrected that her judgement about her not deserving any benefits as monthly allowances from the state was misguided.

Afia Pokuaa emphasized on UTV's Critical Issues that for Rebecca Akufo-Addo's accomplishment, the President was saved from potential criticisms from his political opponents who felt his call was just rhetoric. She stressed that it is unfortunate the proposal for emoluments for the First and Second Ladies were greeted with such protests.

"You should be grateful to your wife, Rebecca Akufo Addo.Yes, I said it here that the First Ladies have no obligation to execute because they are not captured as public officials. But I have pondered and upon further analysis, I tend to disagree with my earlier position...the women also help. In fact, there is none of President Akufo-Addo's ministers that can boldly say he or she had achieved more than the First Lady...not even Napo under whose Ministry the Free SHS was implemented.

"The first achievement of the Akufo Addo government was what Rebecca Akufo-Addo did. And that was the Mother and Baby Unit at Komfo Anokye Teaching Hospital. This was after a series of documentaries that showed the rate of maternal and neonatal deaths at the facility. So in context of the President's claim that he was in a hurry...be a citizen and not a spectator, hers was the first," she justified.

Sharing her thoughts about what could be done to address the debated Spousal Emoluments, Afia Pokuaa indicated that Article 71 is an entrenched position in the 1992 Constitution and that it cannot be expunged or amended as simply as many had argued. She mentioned that the only way out is to call for a referendum to allow Ghanaians to approve or disapprove of the proposition.

A panelist on the show, Lawyer Akwasi Boateng disclosed that the framers of Article 71 of the law entitled so much power to beneficiaries and thus made it praically difficult for any ordinary amendment.

Brahabebome: One Killed, Living 12 In A Critical Condition

Grounds and Procedure for Revocation of a Teacher’s License

"I Will Not Cover My Face; I Want To Educate The Public On The Dangers Of The Disease"