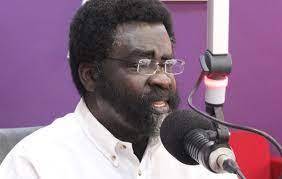 President Akuffo-Addo is refusing to reshuffle Ministers because he fears deep secrets in his administration will be leaked to the public, thus according to Dr Amoako-Baah, leading member of the ruling New Patriotic Party.

Dr Amoako-Baah, who has been on the nerves of his own Party’s government, says Akuffo-Addo feels his administration will be exposed if he replaced his appointees with new people.

“Any government that finds it distasteful to reshuffle ministers has too many secrets and this is why they don't want new eyes and ears because the same one who is there plays the game and lets keep it going, that’s part of the equation”, he explained.

Dr Amoako- Baah said this on Joy FM’s Top Story show in reaction to President Akuffo-Addo’s dismissal of calls for a reshuffle in his government.

President Akuffo-Addo in a radio Interview dismissed calls for him to reshuffle his appointees, especially Ministers of State.

The President while speaking in an interview in the North Star Radio in Tamale, said that he is satisfied with the performance of his appointees.

"The issue of reshuffling or performance of my ministers is a daily pre-occupation, I'm required on a daily basis to ask myself whether a particular minister is up to the mark.

"I am the final authority and if they are not up to the mark, I'm required to act. So if they are up to expectations then I don't have any reason to heed to the calls for reshuffling," President Akufo-Addo said.

He added that “the NDC wants to destabilize your government, there are people who are also looking for jobs," he said amidst laughter.