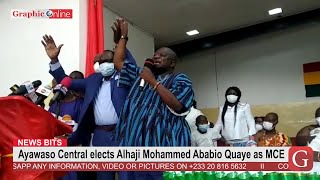 The Ayawaso Central Municipal Assembly has re-elected Alhaji Mohammed Ababio Quaye to a second term as the Municipal Chief Executive.

In an election monitored by Electoral Commission officials on Monday (September 17) in Accra, Alhaji Quaye, who had been nominated by President Akufo-Addo to serve another term, received the votes of all 17 Assembly Members, including 12 elected and five government appointees.

Alhaji Quaye committed to work with all people to ensure that development projects are brought to the Municipality in his acceptance address.

"To achieve this, I will continue to introduce more changes to assist the Assembly's Revenue Mobilization campaign, as well as to aggressively address the threat of sanitation and crime-related concerns in the Municipality," he stated.

"In addition, I want to guarantee you of an open and accountable administration, as well as partnership in addressing the Municipality's difficulties."

He also thanked President Nana Addo for re-nominating him, as well as Henry Quartey, Greater Accra Regional Minister, and Assembly Members for their overwhelming support.

Alhaji Quaye also pledged to run a transparent government and work together to address the Municipality's difficulties.

Alhaji Quaye was guaranteed by Assembly Members that he did not need to make an address before the vote because they had worked with him for over a year. This act foreshadowed his astounding stamp of approval.

Mr Hudu Ismai, the Assembly's Presiding Member, encouraged Assembly Members to save Alhaji Quaye the embarrassment of having to appear before them again because President Akufo-re-nomination Addo's was in honor of his hard work and successes in the constituency.

"Honourable Alhaji Quaye is not a newcomer to our ranks; we are familiar with him, and he has recently been renominated by the President for his hard work, accomplishments, and moral standards. On this basis, I implore you to vote overwhelmingly in favor of our Chief Executive "Mr. Ismai explained.

Mr Quartey, the Greater Accra Regional Minister and Member of Parliament for Ayawaso Central, expressed confidence in Alhaji Quaye's re-election, but urged Assembly members to ensure that he obtained 100% of the vote.

"I'm sure you'll confirm him, but make sure he returns to Ghana 100 percent, so Ghana can be proud of your constituency. I'd be proud of my district, and the people of Ayawaso would be proud of you "Mr. Quartey explained.

"I implore you, Honourable Assembly Members, make it one touch and 100 percent."

The vote and announcement of the results took less than 30 minutes, and Alhaji Quaye was congratulated by the Regional Minister and all Assembly members once the results were announced.