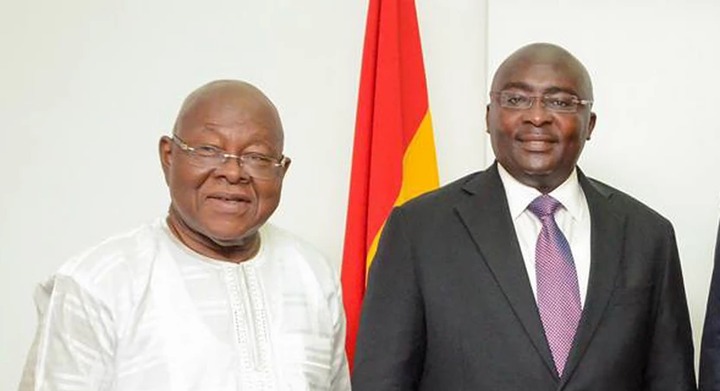 The former Speaker of Parliament, Professor Aaron Mike Oquaye, has thrown his weight behind Vice President Dr. Mahamudu Bawumia to become the next president of Ghana.

Although the Vice President is yet to declare his intention to run for president after the expiration of the mandate of President Nana Akufo-Addo, many of his surrogates have been actively campaigning for him.

On various social media platforms, his supporters project him as the inevitable next leader of the New Patriotic Party and ultimately, the next president of Ghana.

Prof. Quaye believes the Vice President has laid a solid foundation for the formalization of Ghana’s economy and that he deserves to be given the mandate to continue with his good works.

He cited the digitization of Ghana’s economy which he noted has improved revenue inflows and has subsequently lowered corruption at the country’s ports and other key revenue-generating institutions.

They include the GPS Addressing System, Mobile Money Interoperability, Digitalization in renewing National Health Insurance, Paperless Port System among others.

"It would be fantastic if we are able to continue with this digitalization and automation, including ICT of Dr. Bawumia,” he told Okyeman TV.

This is not the first time a high-profile NPP official has backed Dr. Bawumia to succeed President Akufo-Addo. It will be recalled that a founding member of the NPP, Madam Ama Busia note in April this year that Bawumia was more than qualified to be president of Ghana.

She described the Vice President as a ‘gem’ who has distinguished himself very well in supporting President Akufo-Addo to govern the country. “Dr. Bawumia is more than qualified to lead the NPP in 2024. The young man is a gem” she stated.