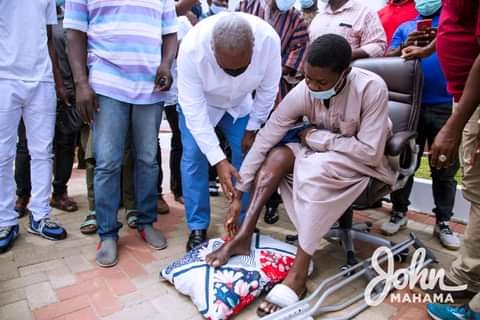 The victims and families of the January 31, 2019 by-elections bloody incident that occured at Ayawaso West Wuogon have paid a courtesy call on the Former President and Leader of the National Democratic Congress (NDC), John Dramani Mahama to express their deepest appreciation to him for the help he singlehandedly offered to them at the hospital.

In response to this, Mr John Dramani Mahama expressed shock at the level of impunity that has found its grounds in the Akuffo-Addo/Bawumia led New Patriotic Party (NPP) government, saying that it is the number one cause of violence in the country recently.

At the meeting with former President John Dramani Mahama, the victims of the shooting incident said that none of them had received any payment from the government as recommend by the Emile Short Committee which was tasked to investigate the incident. 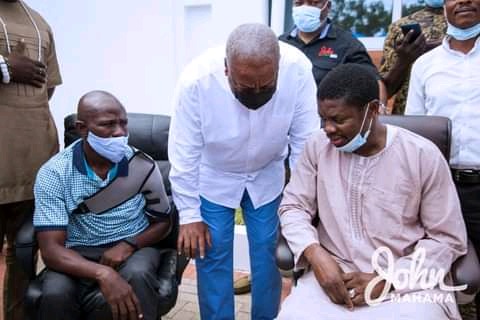 The spokesperson for the victims, Abdul-Razak Garba, stressed that the victims and their families are struggling as a result of the painful experience.

He said that some of the assaulted victims went through life challenging experiences with some having to go through series of major surgeries, others have been rendered incapacitated for the rest of their lives, some also currently suffering from stroke and one person confirmed dead as a result of the indiscriminate gunshot wounds.

Abdul-Razak Garba also recounted how the government failed to deliver on its promise to take care of them and their hospital bills. He said that the recommendation given by the committee which probed the case has not been regarded in anyway. They is thus disappointed in the government for their unsympathetic attitude towards them.

He, together with the other victims and their families, recounted that it was Mr Mahama who came to their rescue, provided them with most of their basic needs, and fully funded the cost of major surgeries undertaken on them and the medical bills. Former President John Mahama sympathized with them and stated that no matter how long it takes, the NDC will do everything possible to ensure that the perpetrators are brought to book. He also told the victims to hold their heads high and partner with the NDC in ensuring that this is done for good. He also told Ghanaians to not forget this particular incident.

The Ayawaso West Wuogon by-election incident ensued on January 31, 2019 after security agents deployed to the constituency on the day of the by-election went on a rampage, beating and shooting indiscriminately at polling stations and the residence of the opposition National Democratic Congress’ (NDC) parliamentary candidate.

This resulted in many innocent people being severely injured. A committee known as the Emile Short Committee was tasked to probe the sad development and to ensure that appropriate sanctions are meted out to the affected persons.