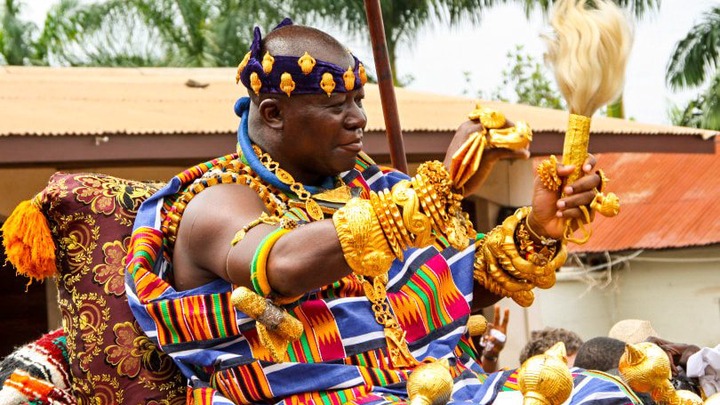 Osei Tutu II (born Nana Barima Kwaku Duah; 6 May 1950) is the 16th Asantehene , enstooled on 26 April 1999. By name, Otumfuo Osei Tutu II is in direct succession to the 17th-century founder of the Ashanti Empire , Otumfuo OseiTutu I.

He is also the Chancellor of the Kwame Nkrumah University Of Science and Technology (KNUST). Otumfuo Osei Tutu II is the Grand Patron of the Grand Lodge Ghana and the Sword Bearer of the United Grand Lodge of England

Ohenenana Kwaku Duah (Nana Agari), Brahyiahene of Kantinkyiren in the Atwima district, was the paternal grandfather of Otumfuo Osei Tutu.

When Otumfuo was roughly five years old, he moved into the royal household of his uncle, Oheneba Mensah Bonsu, the Hiahene, as early preparation for his future role.

The Asantehene Osei Tutu II's natal name is Nana Barima Kwaku Duah, which is also the name of the Asante monarch's paternal grandfather. 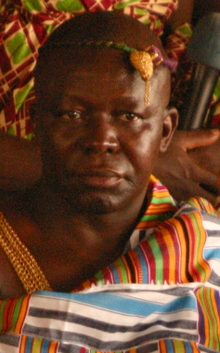 He received his primary education in Kumasi and then transferred to the Sefwi Wiaso Secondary School in 1964, where he earned his 'O' Level. He was taught by Nana Kwadwo Aduhene II, the late Omanhene of Sefwi Wiaso, who was a cousin of Otumfuo's guardian uncle, Oheneba Mensah Bonsu, Hiahene. He went to Osei Kyeretwie Secondary School as well (OKESS). He studied accounting at the former Institute of Professional Studies in Accra, which is now known as the University of Professional Studies. He subsequently went on to the North London Polytechnic (now London Metropolitan University), where he received a Diploma in Management and Administration. He was awarded an honorary doctorate by the University at a ceremony at the Barbican Centre on 11 January 2006.

A career in the private sector

He worked as a senior consultant for the Mutual of Omaha Insurance Company in Toronto, Canada, from 1981 until 1985.

In 1985, he returned to London and joined the HPCC Stonebridge Bus Garage Project in the London Borough of Brent as a Personnel Officer. Primoda Financial Services Limited, based on Kilburn High Road in North West London, was his first mortgage finance company. In 1989, he went to Ghana to launch Transpomech International (Ghana) Limited, a transportation company.

In the Asante regions (Ashanti Region and other regions of Ghana), the Asantehene is venerated, and he is typically regarded as the first among equals of Ghana's traditional rulers. Osei Tutu has regularly remarked on Ghanaian politicians' efforts. When some of the Ashanti crown jewels were allegedly taken from an Oslo hotel in October 2012, while he was attending a conference in the Norwegian city, he attracted international media attention.

He was the first person to win the 'Pillar of Peace Award' in February 2020. This was in appreciation of the roughly two-decade work he put towards restoring peace to the kingdom of Dagbon.

He also earned the President's Special Award from the CIMG for 2019.

Thank you for taking the time to read this article. Please leave your comments below and click the +follow button in the upper left hand corner of your screen to receive more trending and interesting articles from me.

Please share this article with your family and friends by liking and sharing it.

Content created and supplied by: GTN360 (via Opera News )