Ablakwa Speaks on the US$100,000 Video Made by GNPC Boss Driver: Surprised Police Did Not Invite him 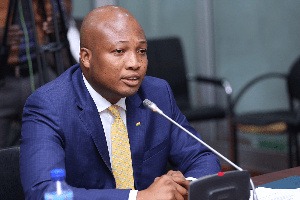 The member of parliament for the North Tongu Constituency in the person of Honourable Samuel Okudzeto Ablakwa has spoken about the one hundred thousand dollars video that went viral recently.

About four months ago, the driver of the boss of the Ghana National Petroleum Corporation was seen in a video that is below this article. The video featured the driver showing his car and an amount of money believed to be up to One hundred Thousand United States Dollars.

The video has gone viral and has seen a lot of people including well-known politicians talking about it.

The issue tends to be going down as the fix the country Demonstration amidst others are going on. Most people seem to lose focus of this fact.

However, yesterday, the 6th of August 2021, the member of parliament for the North Tongu Constituency in the person of Samuel Okudzeto Ablakwa seeks to bring up the issue.

He stated that he is shocked that the driver was not invited by the police to answer where he has got that amount of money from.

Many people are asking questions as to where the driver of the CEO of GNPC, K.K Sarpong could get such an amount of money from. This is what many did not understand and are asking the police to investigate by calling the driver over.

It should be noted that the driver according to records take GHC5600.00 a month and he was employed in November 2019.

In the video that was spotted and watched by Wysopera HERE, the man can be seen opening the door to his room and showing off his property till he took out the amount of money.

Do you think that the man really worked for the money?