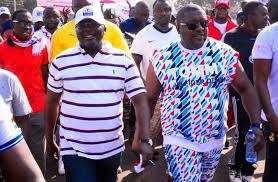 Dr Anamzooya having been appointed for the first time as the chief executive officer of Northern Development Authority (NDA), in December 2019, was dismissed in controversial circumstances, with many still casting doubts over what might have caused his dismissal.

The group which held the press conference at the Youth Resource Centre in Tamale, question the rationale behind his sacking, after claiming that the period he served as NDA CEO, was short to be used as a baseline period to assess his efficiency.

The group alleged that the board chairman for NDA, one Dr Hakeem Ahmed Wemah, having failed in his attempt to convince Dr Anamzooya to award a $3 million contract meant to invest in agriculture in Northern Development Authority catchment areas, to a company own by [he] the board chairman, known as ‘Tamale Implement Factory Limited’, decided to plot and ensure the removal of Dr Anamzooya at all cost.

The group further pointed accusing fingers at NPP northern regional chairman, Adam Baantima Samba of been part of those plotted for the removal of Dr Anamzooya.

According to the group, Chairman Samba, wanted the $1 million per constituency projects to be awarded to him, however, they say, Dr Anamzooya decline to grant the N/R NPP chairman his request, a situation that resulted in chairman Samba conniving with the Board at NDA to get him sacked.

They described as unfair treatment meted out to the people of northern region, after making the allegation that Dr Anamzooya, was the only northerner left in the 12 member board of NDA.

Mohammed Abdul Manan who read the statement on behalf of the group, called on President Akufo Addo to dissolve the current board and bring back Dr Anamzooya, failure to do so, they will resort to other means of ensuring their grievances are addressed.

The northern development authority was established in 2017 to provide a framework for the comprehensive and long term development for northern savannah ecological zone of Ghana.