Atta-Mills Birthday: Could Mahama's Message End The Beef Between Koku Anyidoho And Him?

By Mavis-Love (self meida writer) | 5 days 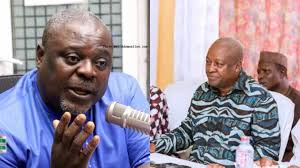 The founder and CEO of Atta Mills Institute, Samuel Koku Anyidoho has been constantly criticizing former President, John Dramani Mahama for neglecting late president John Evans Atta Mills and his statement has become a debate among Ghanaians in the country.

As Ghanaians and the entire NDC party celebrates professor John Evans Atta Mills birthday today, could that be the end of the beef between Mahama and Koku Anyidoho as John Dramani Mahama wishes his former President a happy birthday?

Majority of NDC people hate Koku Anyidoho because he still continues to speak much about late president Mills and usually jabs John Mahama anytime he gets opportunity to speak on internal issues happening in the NDC party.

Koku Anyidoho's concerns has been that former President, John Dramani Mahama does want to make any comment about John Evans Atta Mills and his rotting tomb which he had told the general public that he had renovated.

Many people are saying John Dramani Mahama has replied Koku Anyidoho through his message shared on his social media today because that is what Koku Anyidoho wanted from him and they may also expect Mahama to further talk about Atta Mills tomb and offer some help.

"Happy birthday Prof. Continue to Rest In Peace" former President John Dramani Mahama said today to acknowledge the late President who rule from 2009 to July 2012 before he died.

Ghanaians reacting to the message shared by Mahama stated that late President John Evans Atta Mills is "the most compassionate leader in the history of Ghana" and said they personally missed listening to his voice of "sincerity", and seeing his "deeds of deligence".

Some people thought and said that Ghana would have been much better with Atta Mills and said "you served genuinely and passionately. Everything you did was for your people and never for your own interest. HBD & RIP Champion!"

"Happy Glorious Birthday to you Daddy and humble President ever, no wonder His Excellency John Dramani Mahama has imitated late President Professor JEA Mills of blessed memory. May His Gentle Soul Continue To Rest In The Bosom Of The Lord. Oh Death hmmm" another Ghanaian stated.

Some people thought that late President John Evans Atta Mills is a good servant of God and his leadership was very good and added that "all your messages are peaceful. Rest in perfect peace. You will forever be remembered".

Although majority of Ghanaians feels that Mahama and Koku Anyidoho may smoke the piece pipe after Atta Mills birthday but Koku Anyidoho's response to Mahama's message may prove what people are saying is true or false in the coming days.

To Find Happiness, Take A Break And Let It Go

I am an actor not a ritualist said Yul Edoche.