On April 10, 2017 President Nana Addo Dankwa Akufo-Addo gave a prudent directive at Peduase Lodge in the Eastern region of Ghana, regarding the purchase of state vehicles by government officials.

The President stated that government officials cannot buy state cars that are more than 3years old.

Yesterday, April 10, 2021 the renowned legal practitioner and Executive Director of Ghana Center for Democratic Development (CDD-Ghana), Professor Henry Kwasi Prempeh, asked about the update of that policy on his Facebook page.

Prof. H. Kwasi Prempeh made reference to his Facebook post, dated April 10, 2017 that government should include state assets like lands and bungalows to the directive in order to eschew government officials from purchasing it without any open auction.

However, Facebook user, Ercanmaklean Erickson, accused the legal practitioner for being a double standard in his political contribution to the state.

According to Ercanmaklean Erickson, Prof. H. Kwasi Prempeh campaigned for NPP to win power in 2016. Therefore, he should be ashamed of himself for supporting the government.

“Fast to praise clueless people you worked for to come to power got the eggs on your face”, he said.

“Far better than still supporting clueless people who have nothing better to offer. Ofui”, he said.

Moreover, Ercanmaklean Erickson accused Prof H. Kwasi Prempeh for being mute about the spendthrift borrowing of the current government and further labelled him as a dishonest person.

“Principle, truth and honesty is what most elders like you lack! You guys only take convince positions”, he said.

Prof. H. Kwasi Prempeh responded that he doesn’t have time to lecture him about the numerous posts he has made against the government profligate borrowing.

He later asked him to stop spewing inaccurate information on his page.

“Get off with your useless nonsense. Your profile photo says enough”, he said.

Their chat is uploaded below. 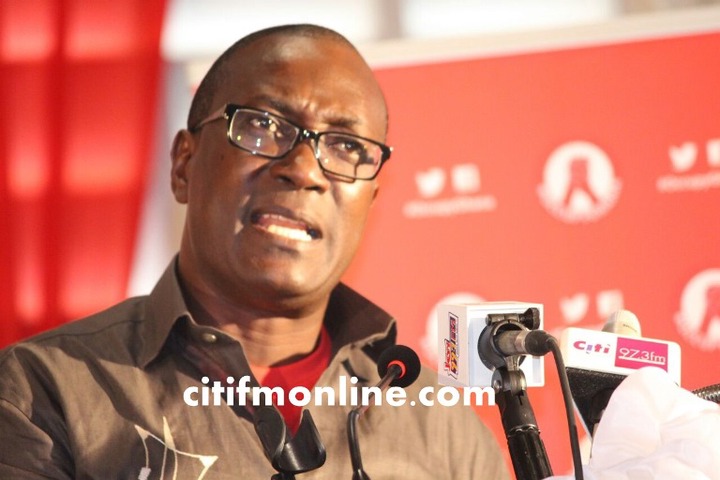 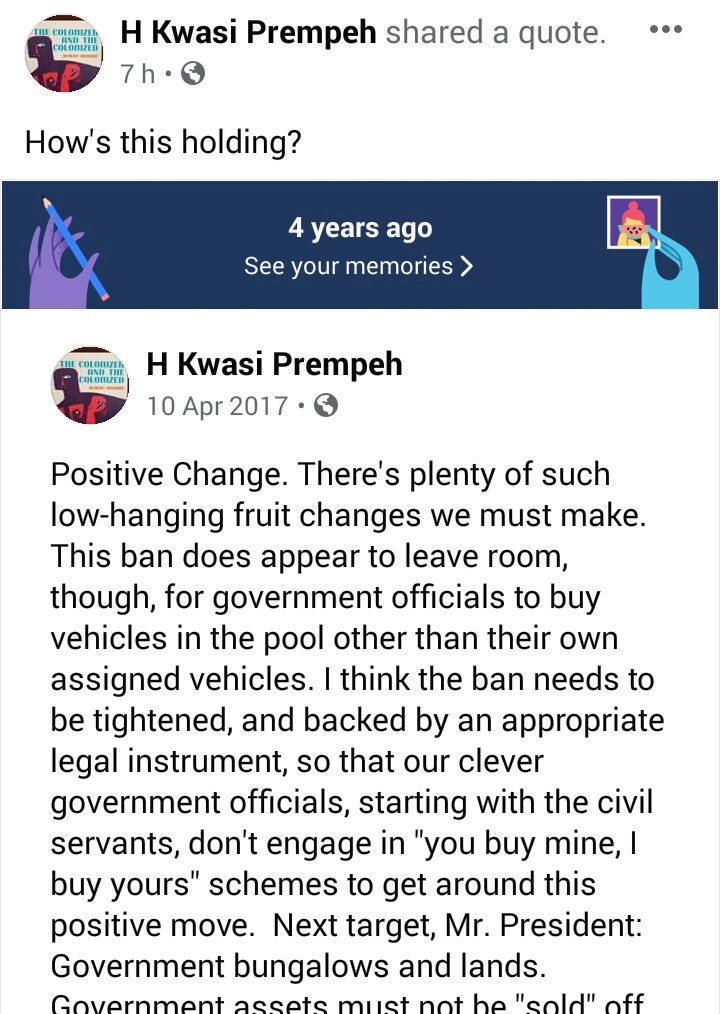 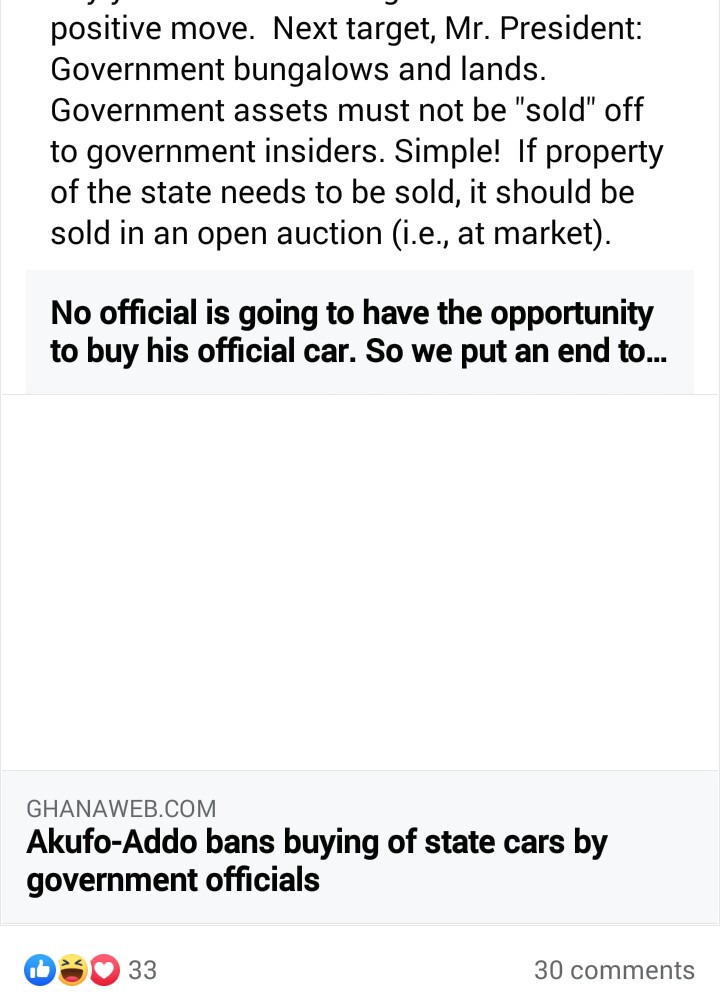 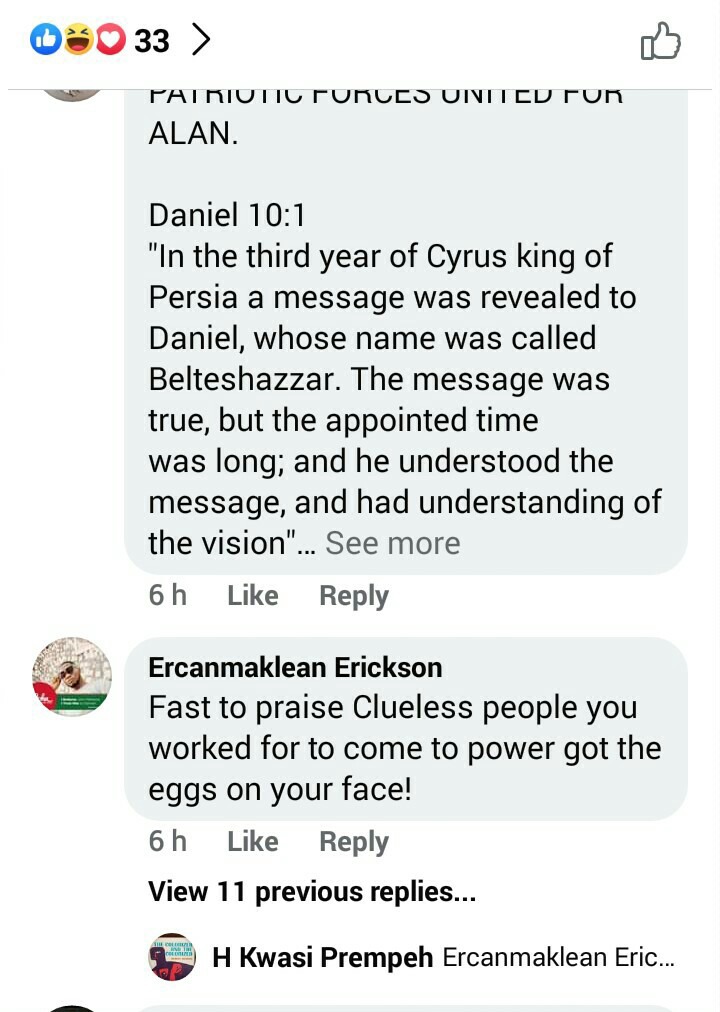 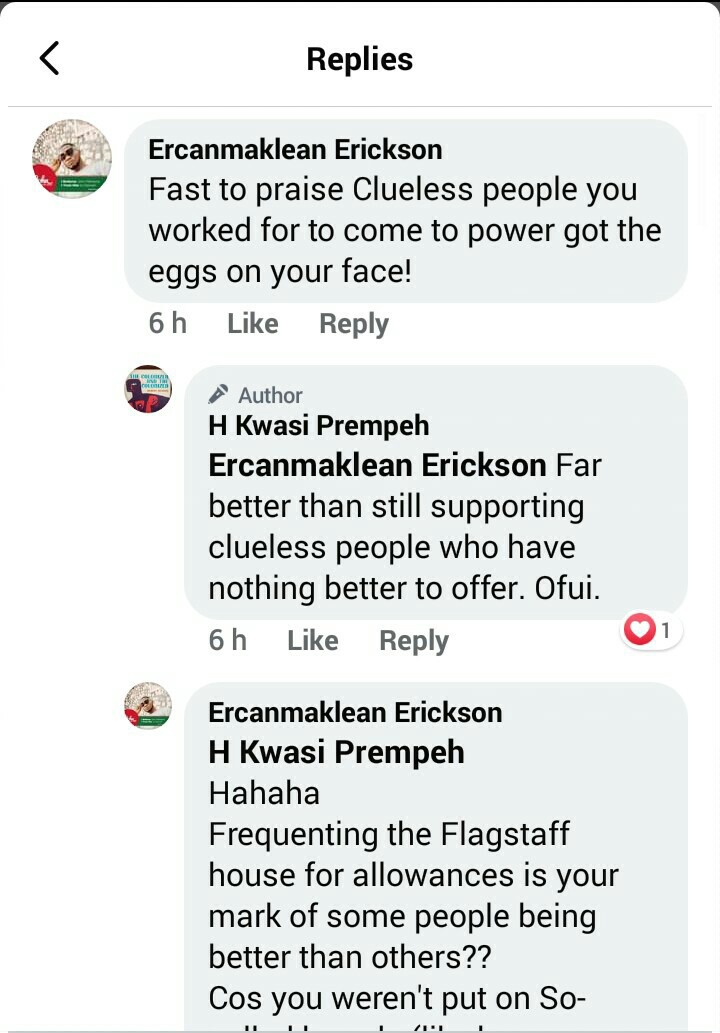 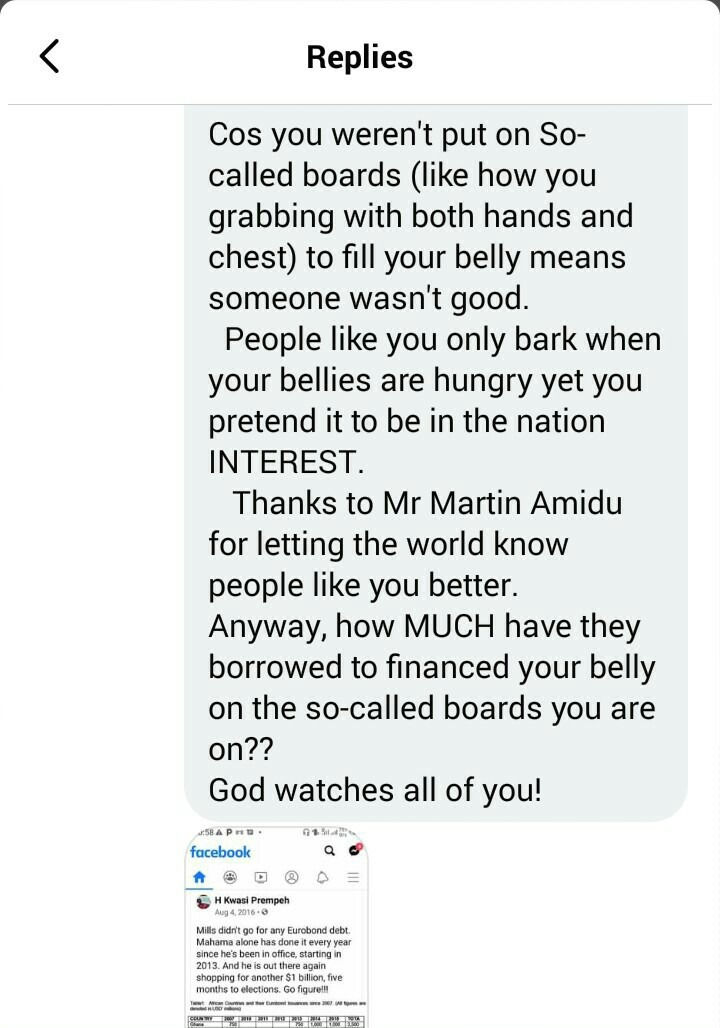 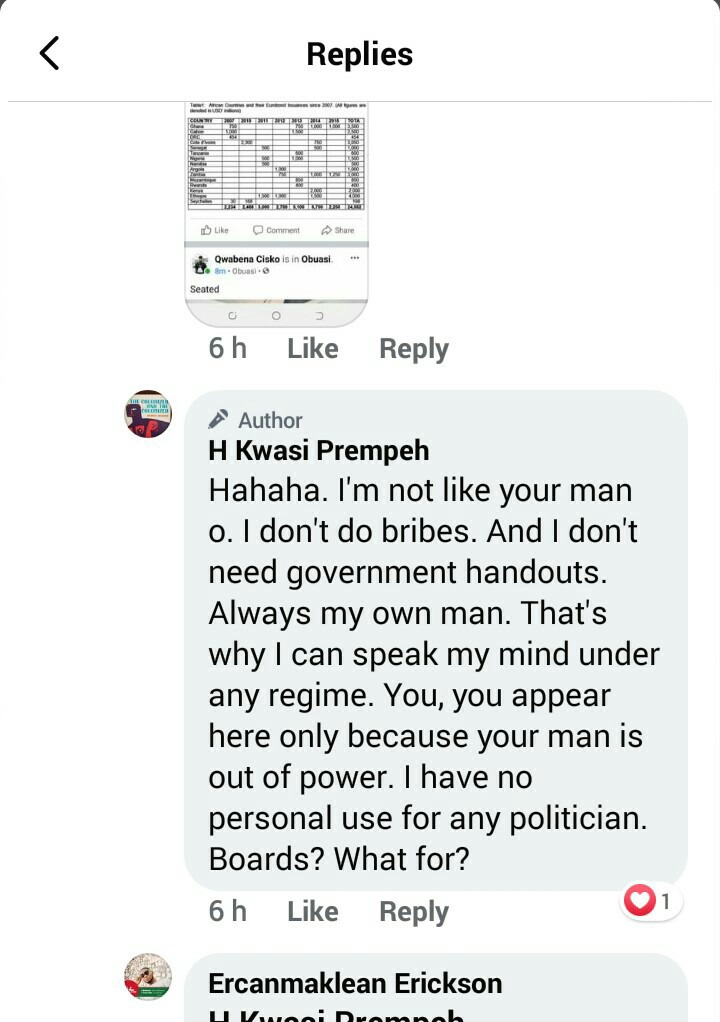 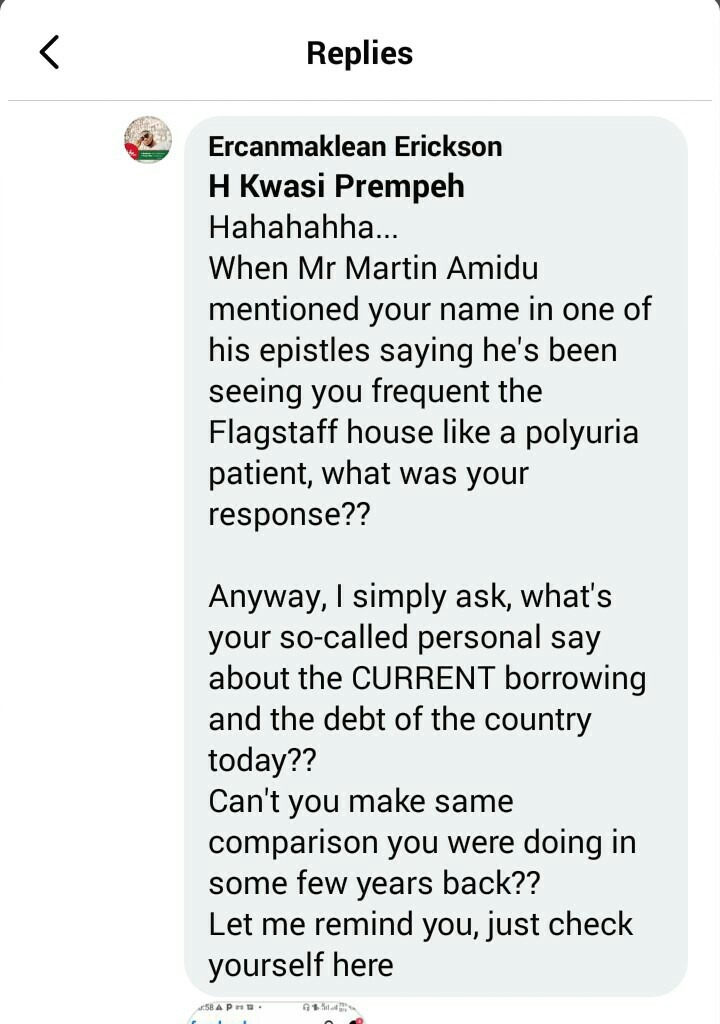 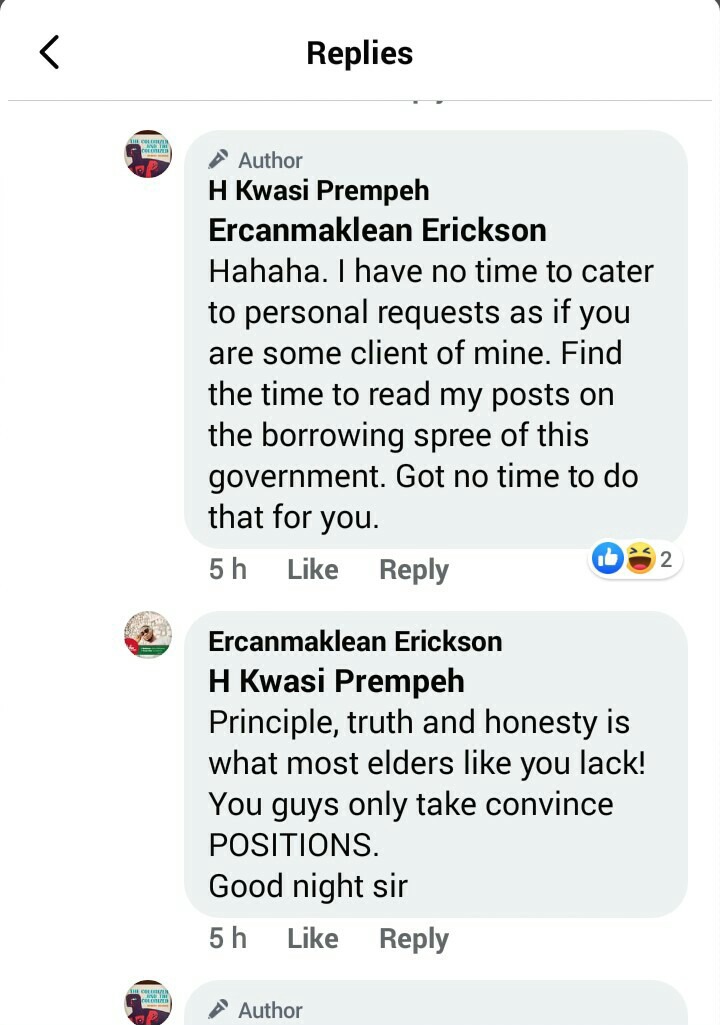 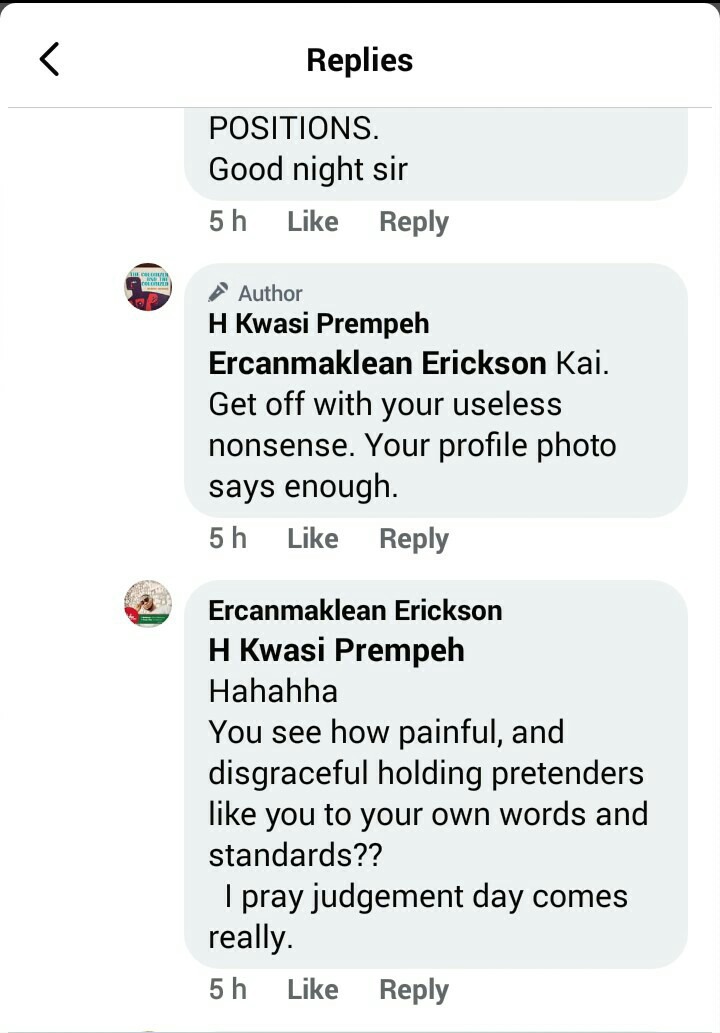