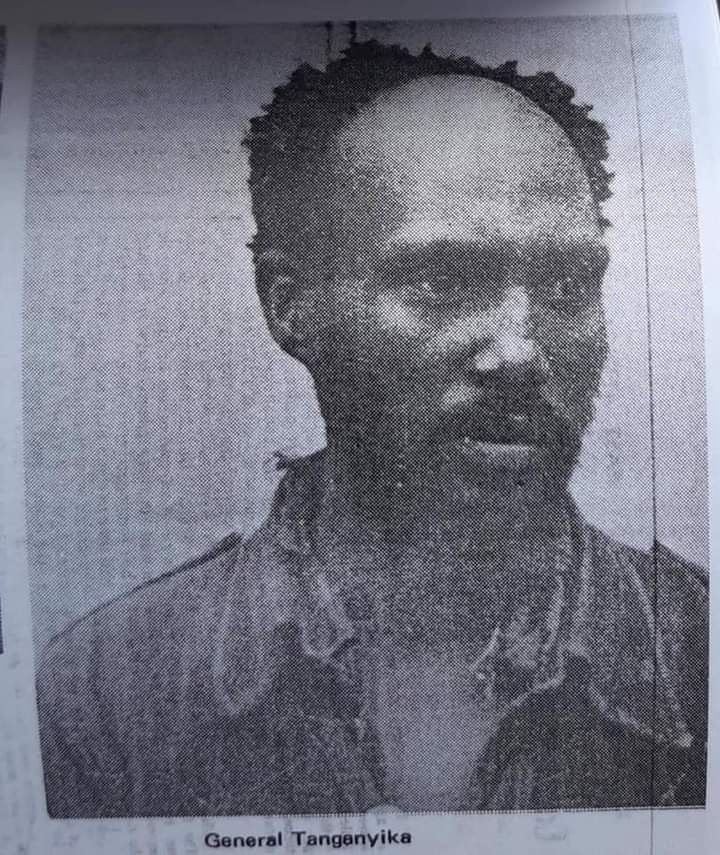 On April 10, 1956, an enemy force ambushed General Tanganyika's force on the Embu border. The battle raged for two days. The casualties on both sides were heavy. Despite their heavy casualties the stubborn enemy refused to give up the fight and to strengthen their offensive they called for reinforcement, artillery and aircraft war thrown in. A countless number of guerillas were killed, others captured, including General Tanganyika. Separated from his comrades, General Tanganyika was rushed to the provincial police headquarters in Nyeri town. The enemy subjected him to savage interrogation and torture in a deliberate attempt to coerce him to renounce the armed struggle and surrender. Nonetheless, he proved to be an ardent patriot, a convinced revolutionary. On May 8, the colonial regime dragged him in chain to a kangaroo court and charged him with leading an insurrection against British interests in the country. In his defence, according to multiple sources, he stood up in the colonial court and made a brilliant defense of the revolutionary principles and programme of the armed movement in a patriotic speech filled with courage and contempt for the British criminals whose colonial rule had subjected millions of Kenyans to daily misery, forced labor, oppression, exploitation and early death. With steel-like courage, he told the imperialist judge:

I don’t regret for having led my people in the fight for land and freedom. I want this court to know that I am proud of my revolutionary work---my involvement in the liberation of my country. It is not a crime to fight for national liberation. I prefer death rather than to live under slavery in my own country. Whether you imprison me or kill me, this struggle will continue. It is a noble struggle, a just struggle---a struggle for national liberation and we are determined to regain our freedom and human dignity come what may.

On June 8, the imperialist judge asked General Tanganyika whether he had anything else to say before the judgement was pronounced. With deep conviction in the justness of his revolutionary action, he differently responded,

Don’t feel sorry for me. Sentence me the same way as those of our people who have fallen into your bloody hands. I stand with my people and country. It is independence or death. You can go ahead, pronounce the judgement; I am not afraid of death. I leave my boundless love to my country, my people and my comrades-in-arms. Here I stand.

With the death penalty pronounced, the KLFA General, in contempt, spat on the court floor and then told the kangaroo judge, "Killing me will only strengthen our people's determination to fight for the liberation of our country. We shall never be your slaves again. My great regret is that I will not be there physically to celebrate the liberation of my country."

History of Resistance in Kenya

Content created and supplied by: Bash1 (via Opera News )

African women are pretty. This is my evidence.