There are a lot of contemplating going on about who is going to be the flagbearer of the New Patriotic Party (Npp) to contest for presidential election with the National Democratic Congress (NDC) aspirant in the upcoming 2024 general election.

As a matter of fact, the concern polling station executives of Npp in the Northern region in Tamale at yesterday 9th April, 2021 has expressed their views and why a Northerner, particularly the vice president Mahamud Bawumia should be given the Mandate to led the party in 2024. 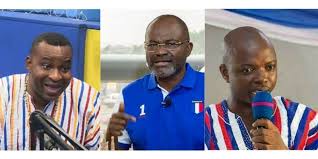 As a matter of fact, the concern polling station Executives of Npp in Tamale demand a "non-Akan' in the upcoming 2024 general election.

In addition, some people said Dr Mahamud Bawumia is a Muslim and a Northerner and can not lead the Npp.

Therefore, if non Alan is not appointed to represent the party, many will believe that the new Patriotic Party belongs to the Akan clan only.