The economic hardships in the country has become a major concern for many people. There have been increases in prices of goods, transportation and increased utility costs. Ghanaians have raised arguments about low or fixed salaries and yet changing prices of goods. Johnnie Hughes today, Tuesday, May 17, 2022 threw a challenge to the president to do better and reduce the hardships. 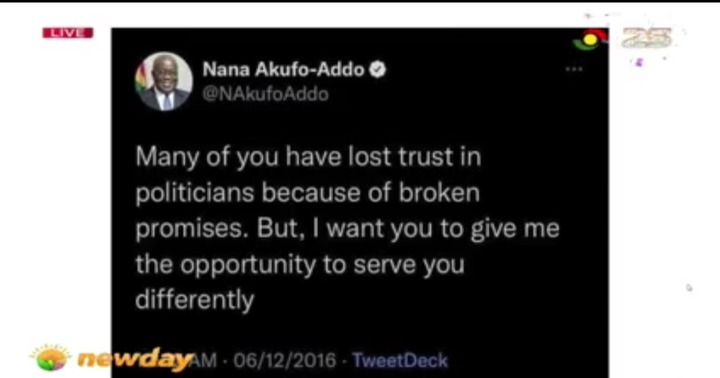 Johnnie noted that the president before he came to power went around the country claiming he is better than the then government and yet he has been a disappointment. Johnnie showed a tweet that President Akufo-Addo made a day to the 2016 elections and wondered what had become of that. In December 2016, candidate Akufo-Addo called on Ghanaians not to lose hope in politicians because he will come in to change the perception of bad governance.

Johnnie averred that Akufo-Addo hasn’t done much. According to Jonnie instead Ghanaians have been peppered by all kinds of taxes and high prices of goods. He wondered where the railway services promised was. He raised questions about rents for the young ones, salaries for NABCo, National Service, LEEP etc. Johnnie also cast doubts about social interventions like the school feeding, food for planting and jobs all which he described as collapsing. Johnnie challenged President Akufo Addo to rise from his slumber and do better because the pepper situation is too much.

Prof. Wajackoyah promises to legalize the growing of marijuana, dog meat and snake farming in Kenya.

John Mahama loses hope in how the NPP is working: Why has Nana Addo spent all our future revenues

A Ball Of Kenkey Cost GH¢3.50 In Some Part Of Accra And Kumasi