Sammy Gyamfi has made the decision process of NPP delegates very simple. This can be the case if and only if the aim of the delegates is to select a person who will help the party break the eight and not just follow NPP tradition. The explanation and analysis given out by Sammy Gyamfi must be taken into consideration.

In an exclusive interview, Sammy Gyamfi chose between Alan and Dr. Bawumia and the reason behind his selection was that one of the two, when selected or elected as flagbearer, will guarantee a smooth victory for John Dramani Mahama. He argued that the other candidate will make the NDC's job very difficult but the NDC will still win even with that candidate.

"I heard they want to bring Dr. Mahamudu Bawumia. He is the one we have always wanted. They should give us Dr. Bawumia over Alan. We want Bawumia because we do not need to campaign. Bawumia and Alan have failed Ghanaians but Bawumia has failed more than Alan. You just check where the dollar is as now. I do not want to campaign for anyone. Assuming the NPP selects Bawumia, I will not even have to convince Ghanaians. All that I have to do is to play the tape of Bawumia.", he explained. 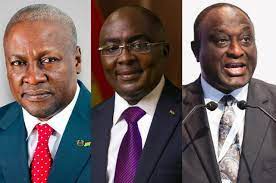 Some people have reacted that Sammy Gyamfi was trying to just play some tactics with the mind of the New Patriotic Party. The thought was that, with that suggestion from Sammy Gyamfi, the NPP will be forced into choosing Alan rather than Dr. Bawumia. And we all know even from the several polls that Alan is nowhere close to Former President Mahama.

But what if Sammy Gyamfi was right? Ghanaians will have to vote based on track records assuming Bawumia is selected as flagbearer; Bawumia as Vice President and Mahama as President and the records are very clear to see.