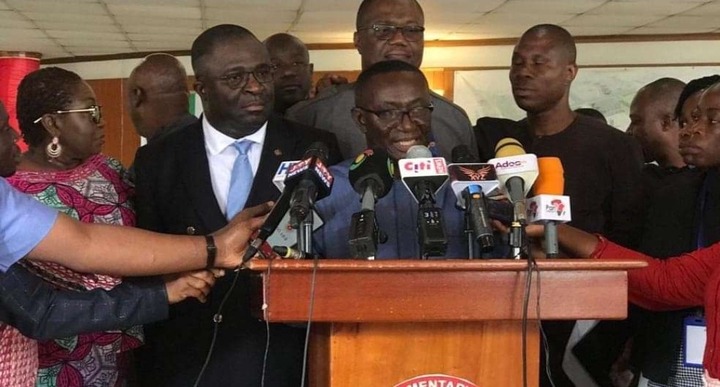 Earlier this week a number of MPs belonging to the Majority side of government sent a clear message to President Akufo-Addo. In a press conference they called on the president to sack the Finance Minister because Ghanaians had lost faith in him. They also insisted that they will not engage in any government business in Parliament.

Hours later President Akufo-Addo met with the Majority Caucus in at the Jubilee House and talked to them. In the end the over 80 NPP MPs who had protested agreed to allow Ofori Atta continue the deal with the IMF before his fate is decided. On The Keypoints today, Saturday, October 29, 2022, Ransford Gyampo, a Political Science lecturer with University of Ghana has blasted some NPP MPs who agreed with Ofori Atta being sacked and yet chose to hide their faces and refused to join.

According to Ransford Gyampo, the MPs need to be ashamed of themselves and should be condemned for choosing to please their stomachs and not fight for the nation. He questioned the rationale in hiding from joining such a cause to remove a minister who had failed. Prof. Gyampo also lashed at the leaders of the Majority side for also hiding behind some faces to call for the sacking of Ken Ofori Atta. Ransford noted that there were many NPP MPs who favored the sacking of Ken but some acted cowardly and stayed behind.

Many have questioned why President Akufo-Addo will choose to maintain Ken Ofori Atta to finish a deal that he will not be there to initiate after it is done. Another question is whether the new minister who might possibly replace Ofori Atta will be okay with the deal that the latter is negotiating. Many felt that at least President Akufo-Addo should have appointed a new minister so that both he and Ofori Atta will get Ghana the deal.

Do you agree that the NPP MPs who refused to join their colleagues to protest should be condemned?