By NaturallyMummy (self media writer) | 4 months ago 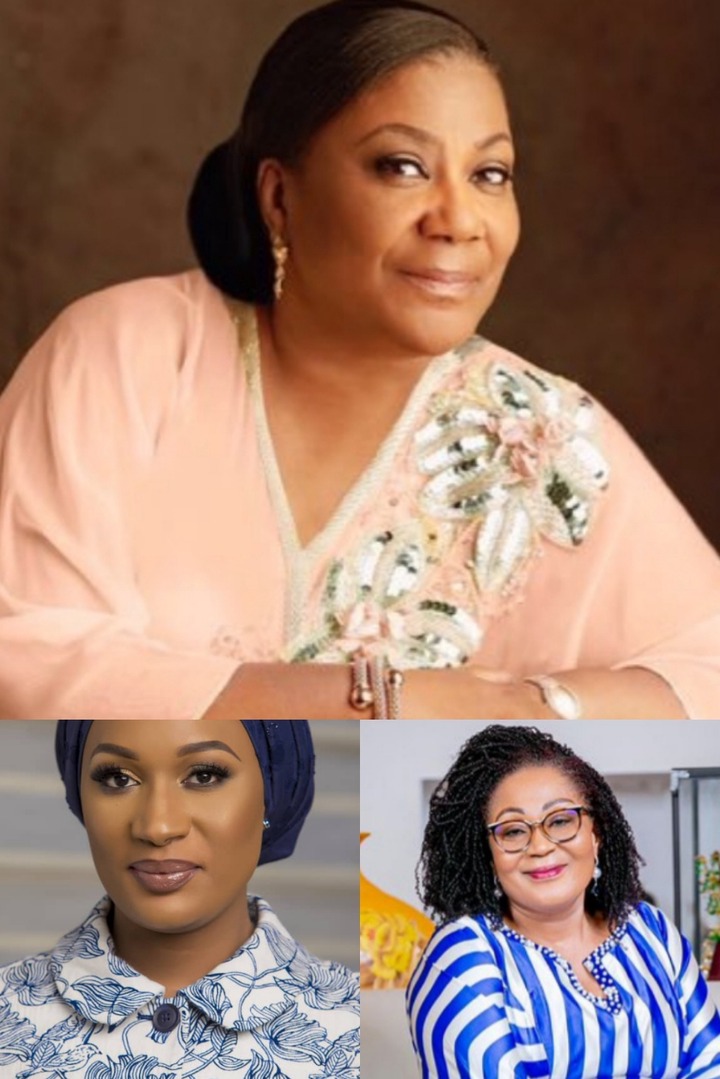 The government of Ghana was on the receiving end of a backlash by citizens who were livid about the decision and approval of Parliament to give the First and Second Ladies of the Republic of Ghana monthly salaries. Not only were Ghanaians infuriated about the said salaries which were to be equivalent to cabinet ministers, but they bemoaned the salaries which were coming in at a time of growing economic crisis in the nation.

Former President of Ghana, John Dramani Mahama and the Trades Union Congress(TUC), also voiced out their opposition on the said emolument.

In a statement issued on the 12th of July, the First Lady of the Republic, Mrs. Rebecca Akuffo-Addo, indicated that she was refunding all emoluments, which had been approved to be paid her from January 2017 till date- which amounted to GHC899,097.84. 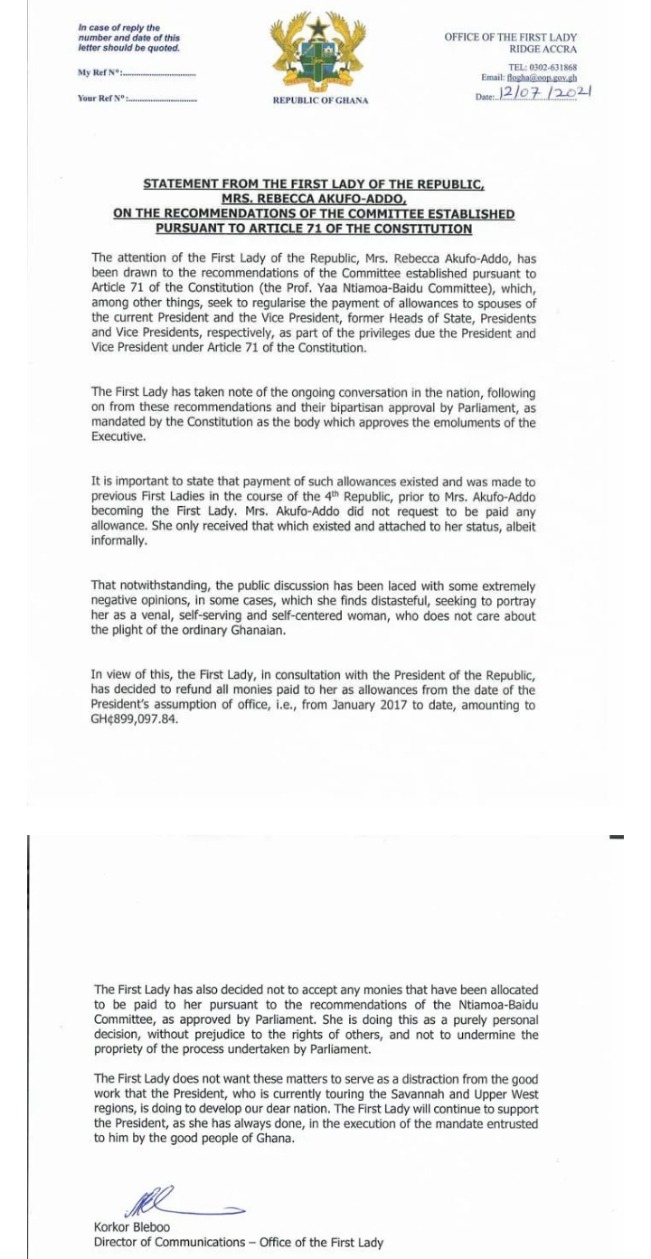 Her decision, which was purely personal, had been made on the basis of public discussions which were laced with extremely negative opinions in some cases, that sook to portray her as a venal, self-serving and self-centred woman who did not care about the plight of the ordinary Ghanaian.

A day after the First Lady, Mrs. Rebecca Akuffo-Addo rejected the allowances, the Second Lady, H.E Samira Bawumia, indicated in a statement signed by her Senior Aide, Kwame Twum, that in consultation with H.E The Vice President, she was refunding all allowances paid to her since 2017 and was not accepting any monies allocated to her. 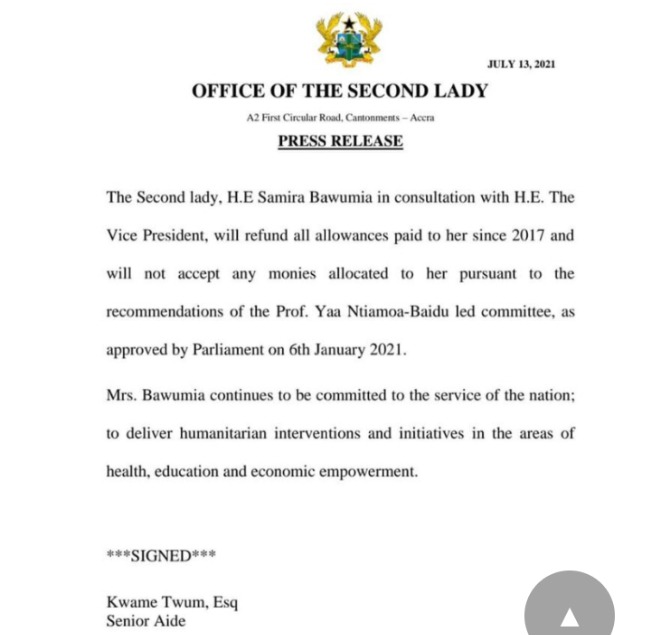 Mrs. Lordina Mahama, who after the demise of Former President John Evans Atta Mills, became First Lady when her husband John Dramani Mahama took over the presidential office, became the next target of attack when a publication made its way to social media. The publication stated that Mrs. Mahama was ready to refund all emoluments paid her in her tenure of office- both as a First and Second Lady.

Mrs.Lordina Mahama in a tweet denied this statement and declared that it was fake. 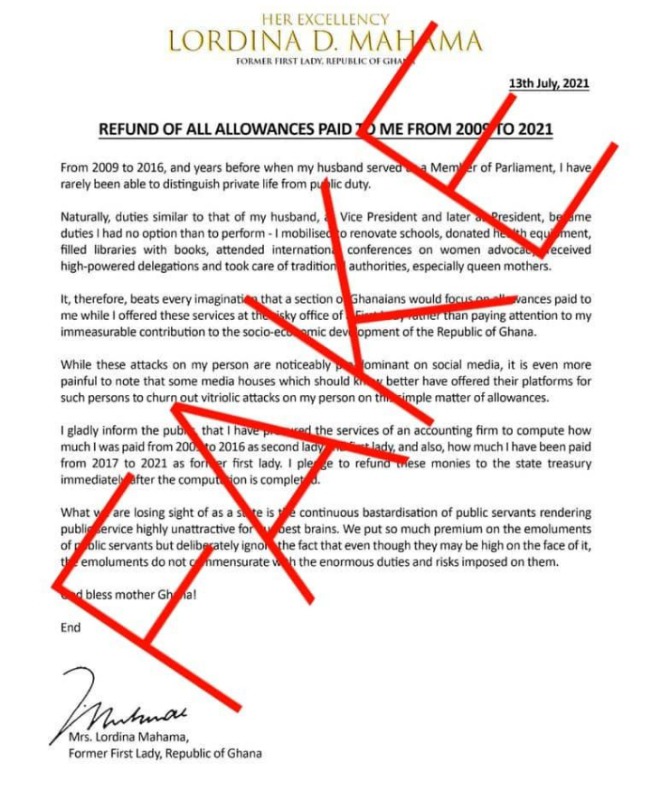 However, a 'Bring Back Our Money' hashtag began to trend as some Ghanaians still felt she had to refund her allowances as well.

Content created and supplied by: NaturallyMummy (via Opera News )