By YoungCyfer (self media writer) | 25 days ago

In every government, there are basically three (3) major organs with the primary of running the affairs of the state. These organs are 1. The legislature-carrying out the legislative functions of law making 2. The executive-that formulate and implement government policies responsibility 3. The judiciary-responsible for interpretation of laws and administration of justice In modern states, each of the above mentioned organs is autonomous in composition. structure and functions. However, they work hand-in-hand and they are interdependent in the performance of their various functions. Let us now consider in detail, the features, structure. functions and limitations of each of these three organs.

FUNCTIONS OF THE LEGISLATURE

It is an undeniable fact that the functions of the legislature are crucial to the administration of the state. Some of the functions are outlined below. 1. Law making: As the name implies, the most important function of the legislature is law making The legislature makes laws to cover all aspects of life (political, economic, religious social, cultural etc.) The laws passed by the legislature give legal backing to policies and programs implemented by the executive. The legislature outdoor new laws and make changes coave or amend already existing ones and also withdraw or repeal outmoded laws. 2. Redress of grievances: Members of the legislature receive grievances from their constituents people) and present them before the House for deliberations and redress On many occasions sector ministers are summoned to appear before parliament to answer Questions relating to the grievances of the people 3. Contral public of finance / approval of government's budget: The legislature has the night to authorize the raising and spending of public funds by the executive. The executive presents the proposals for govemment revenue mobilization and expenditure through the budget for legislative deliberations. The legislature could either accept or reject the budget The legislature appropriates funds to the various ministres, departments and agencies and monies approved for a specific purpose cannot be used for another purposes Loans and grants contracted by the executive are also subject to approval of the legislature. 4. Judicial functions/ impeachment: Some constitutions mandate the legislature to act as a count for the purpose of impeaching and trying the president, the vice president and the superior court judges for a breach of conduct or abuse of powers.

THE SPEAKER OF PARLIAMENT

The speaker of parliament is a person who is either appointed nominated selected or clected by the members of parliament to preside over all parliamentary proceedings The speaker is therefore, the topmost personality in parliament. He/she is one of the three great officers of the state, ranking third in the official order of precedence after the President and the Vice-President. He/she is elected by the members at the first sitting of parliament before the start of any other business in the house. In the political history of Ghana, the office of the speaker was first seen in the 1951 Arden Clarke Constitution of the Gold Coast. Since then all the subsequent Constitutions of Ghana created the office of the speaker. The Fourth Republican Constitution provides that the Speaker shall preside in Parliament at all Sittings and in his/her absence, a Deputy Speaker In the discharge of his/her numerous responsibilities and in the exercise of the powers vested in him/her, the speaker is expected to be impartial and does not take part in debates on the the established practices of the House. floor of the House. Behind the scenes, he/she exercises considerable influence in forging consensus on several issues, whilst fairly and firmly enforcing order and consistently applying 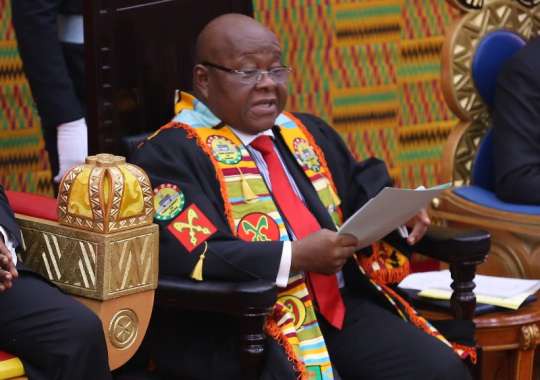 The Best Time to Eat Your Breakfast According to Science

Anti LGBTQI bill: Parliamentarians who are against the bill exposed (video)