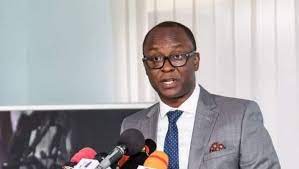 There is a brewing tension from the corridors of national security over the elevation of Edward Asomani as National Security Coordinator.

It is being alleged that Mr Asomani schemed to oust his immediate-past Boss, Major General Francis Adu Amanfo (Rtd) to get the job, a situation many at the National Security are not happy about.

It is again alleged that Mr Asomani while serving as a deputy, undermined his superiors on many occasions by creating parallel systems for operations that were questionable.

Mr Asomani, a former Director of the Danquah Institute, joined the National Security about five years ago and was only appointed the Deputy Coordinator in September, 2021 by [President Akuffo-Addo.

The chimes coming out from the national security confirms that indeed all is not well with one of Ghana’s foremost intelligence agencies.

According to him, the only time a country witnesses such levels of shake-ups is usually when there is a change of government and that the recent changes at the National Security could only mean that there is a problem within the agency.

‘’We need to know the reasons for this massive shake-up by the president. Usually, you see this kind of shake-up at the foremost in national security or intelligence when a new government takes over and they clear those who are supposed to be cleared and others are appointed”, he said.

“The President's statement on the reshuffle of ministers points to the fact that those that have been removed from national security are not doing well. It means they have superintended over certain rot without trying to go and do any research or of any sort”, he added.

“National Security and some of us who work closely with the security agencies will tell you that there is a lot of rot in the National Security”, He said on Accra Based Neat FM.

Doumbouya Returns Home To A Heroic Welcome: Scores Stormed The Streets To Honor Him