By Tinchie (self media writer) | 28 days ago 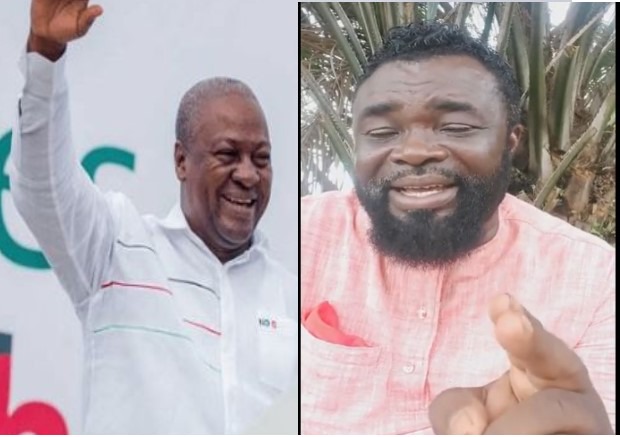 A renowned prophet of God has prophesied that former President John Dramani Mahama shall emerge victorious in the 2024 Presidential election. The prophet, Joshua Adjei who is the founder of Bread of Life Ministry says the former President has a 69 percent chance of taking over from President Nana Addo Dankwa Akufo-Addo, and thereby granting the opposition National Democratic Congress (NDC) the power to govern this nation.

In a video message delivered to both the governing New Patriotic Party (NPP) and the opposition NDC Prophet Joshua Adjei indicated that God's favour on the NPP had been swept off towards the NDC. He explained that there were cautions that were sounded to the government just after the 2020 election which God wished the President and his government addressed.

But the failure of which, according to the Prophet, has caused the divine favour to shine of former President John Mahama and the NDC, as an alternative to the NPP when President Akufo Addo retires in 2024, from the Presidency. He intimated that it is an ultimate victory for John Mahama and there is nothing that could be done to overturn it unless the government heeds to his advice he announced months ago after the election.

Prophet Joshua Adjei disclosed that there will be a paradigm shift in the laws of the country that shall grant John Mahama an extra term of four years when he wins the 2024 election. That, he emphasized has been predestined.

"I have seen it. If we go into election Mahama will get 69 percent of the votes. However it was predestined that the NPP will rule this nation for 12 years but for some reason, they have moved from that regime.

"It has granted the NDC some power to win the 2024 election. I warned about a series of protests that will hit the country. And this is already happening. I have also said that many will rise in 2023 to contest the 2024 election the NPP were in lead but things are getting difficult for them."

He however added that things could be corrected to have God's favour returned to the NPP if President Akufo Addo honours his word. The Prophet said the 12-year rulership of the NPP would be restored if the President and his government please God by fulfilling an obligation he hinted at some months ago.

"There is something that NPP and Akufo Addo can do to overturn this. It is right before them but they cannot see it. It wouldn't matter what they do...roads or whatever they will not be the people's choice.

"Victory is for you Mahama. Though that 69 percent requires some work you have a brighter chance. President John Mahama will have an easy win in the 2024 election but if the NPP unravels the secret task you might encounter problems," he clarified.