I Am Sure Tomorrow, They Are All Going To Quote Supreme Court’s Decision In 2013 - NDC' Kojogah Says

By Kaks_Gym (self media writer) | 1 year ago

Lawyer Kojo Gah Adawudu is one of the spokesperson for the petition and upon being interviewed, gave greetings to Henry Nana Boakye (as many call him Nana B), the NPP Youth Organizer for the second respondent, Nana Akufo-Addo on Asempa FM. 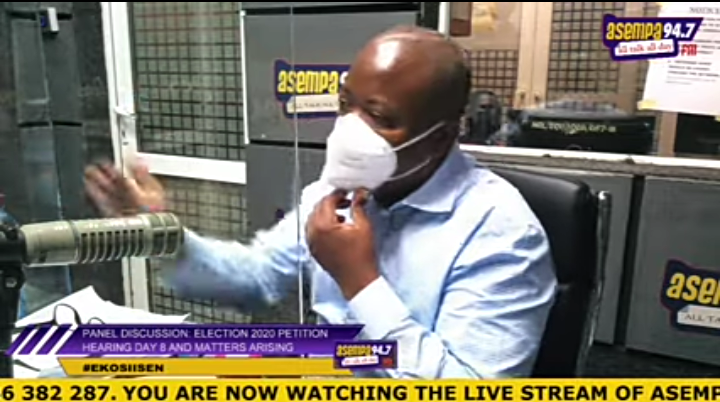 Focusing on statements and words that flew from the lips of Lawyer Kojogah Adawudu, this was what went on on Ekosiisen, Asempa 94.7 FM.

From the day the petition began, the court has also spoken as matters pressing in the courtroom was getting personal. This was addressed by Lawyer Fank Davies who on the other hand is representing Nana Akufo-Addo.

The court felt it was becoming personal when issues with Lawyer Tsatsu Tsikata and the Returning Officer began. Also, talking about Dr. Kpessa Whyte’s issue, it’s going a little personal and that’s not what should happen. We apologize for that is not the kind of communication we want out there.

This is what we wanted in the Supreme Court: Is it about the declaration or validity?

Article 63(9) when read, gives the procedure for a declaration. It will prima facie everything by the person named or so elected. We challenge the validity of the election for which article 63 dovetails into 64.

This is why article 64(2) tells that, the Supreme Court will decide if the person is going to be elected validly or not.

This is how our case has been at the court.

Many was said about the discrepancies of which we gave some sample of this discrepancies that were included. I agree in every election, there are irregularities.

I went to volta region, Ashanti Region, Western-North to Techiman, Sene West, I went all around. The calculation the agents and some of the EC officials made will break your heart. So the figures summing as total could be a problem as it struck us.

This is what happens in election when we go behind doors to re-check, the total is different.

In every election, even two days after, you can’t get all your results.

(Jumping back on the petition and giving his remarks, he said:)

You know, I’ll applaud Akoto Ampaw today. He saw that, if I ask this gentleman further question, he’ll explain way a lot of things. I am sure tomorrow, they are all going to quote Supreme Court’s decision in 2013 but, how you use it and the strategy you will use will determine if you lose or win.

This were Lawyer Kojo Gah Adawudu’s words on discrepancies, declaration or validity, irregularities and remarks of 2 February 2021 Court Petition.

We Are Fighting For A Better Life For Ghanaians - Oliver Barker Speaks Ahead Of Demonstration.