By Ghana_News (self media writer) | 2 years ago

Following the petition filed by Mr. Mahama over the outcome of the 2020 presidential election, the Supreme Court made another bold judgement on one of the most contentious issues that took centre stage. Today, February 16, 2021 marked Day 16 of the hearing of the petition.

Prior to the final ruling, Tsatsu Tsikata had attempted to impress the judges on the reason to reopen their case. Interestingly, the Court adjourned the ruling to be made today after a legal tussle between Tsatsu Tsikata and the Laywers of the Respondents.

However, the court presided over by the Chief Justice Annin Yeboah unanimously dismissed the application for leave to reopen his case. According to the Court, the application has no basis or grounds for approval before the Court. This decision came as a big blow to the NDC team who had attempted to impress the panel.

The Member of Parliament for Ofoase Ayirebi constituency and a spokesperson for the 2nd Respondent's legal team, Honourable Kojo Oppong Nkrumah has reacted to some comments made by a ranking member of Mahama's legal team over the decision by the court.

In what he described as a disappointment, he tagged the comment as Scandalous and contempt of the court. He asserts that, it is unfair for lawyers who have deep knowledge in the law to make such utterances on matters before the Court.

This comment follows after Dr. Dominic Ayine angrily reacted to the ruling and indicated that the NDC hsve lost confidence in the Supreme Court. In his own words he said; "...To reduce the petition into a single issue petition is rather unfortunate and smack of a predetermined agenda to rule against the petitioner in this matter. We think that the court by this decision has not done the people of this country a great service." 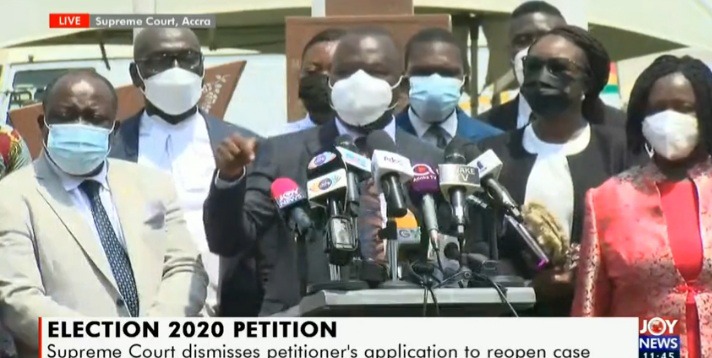 It seems this comment did not go down well with most Ghanaians who have descended heavily on Dr. Ayine and called on him to retract and apologise to the Supreme Court. Kojo Oppong Nkrumah also made the following statement about the comment;

"It cannot be right. The last time they won some argument, you heard them that it was a great victory. Are these not the words they used? It is not fair to our judicial system, democracy and Ghanaians that when you failed to meet the legal standards then you come here to poison the minds of Ghanaians."

"How can you say that they are having a predetermined agenda? That is scandalous of the Court? The Court has not reduced the petition to a single issue. We tried our best to transcribe the ruling."