By Blind_Justice (self meida writer) | 28 days 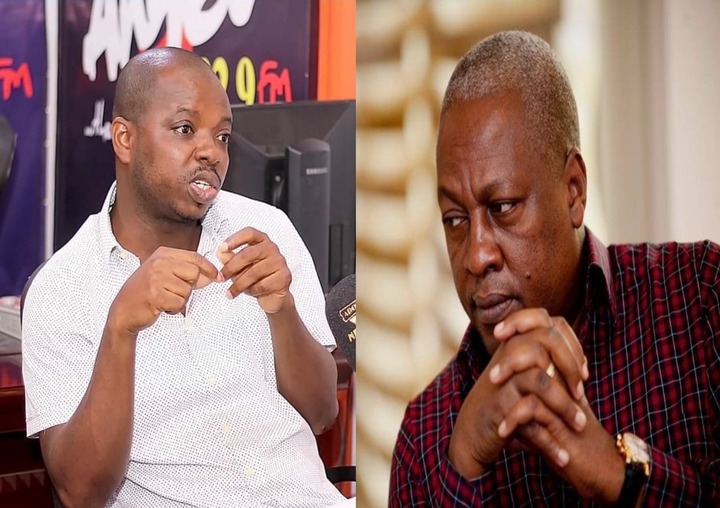 The Bono Regional Chairman of the governing New Patriotic Party (NPP) Kwame Baffoe Abronye has alleged that former President John Dramani Mahama should be questioned for the mysterious death of an investigator of the Criminal Investigations Department who was handling the diverted $15 million EO Group funds which were meant for developing infrastructure in the Western Region. Abronye argues that it is strange for an investigator who has advanced his findings into the matter to be eliminated at such a critical point in the case.

He referenced a publication that had the former Special Prosecutor accuse the CID of failing to produce the dockets on the said matter to support his investigations. Strangely, the dockets and the unit that was constituted by the Police had been dissolved and nothing of their investigations could be retrieved.

The investigations had simply turned ghost! Abronye on Asempa Fie show on Wontumi Television alleged that CID Investigator who was investigating the matter was murdered because John Mahama who was then Vice President under [late] Prof. Mills’ administration was implicated in that scandal. He exclaimed that the only way John Mahama could cover up for crime was to eliminate the investigator and eventually dissolve the unit and any findings into oblivion.

“The CID office who stood in the investigations has gone missing. The man was murdered. The Ghana Police Service is aware and yet they are silent on it because John Mahama was a president. After his death, the docket is missing. How could that be?” he reiterated.

The former Special Prosecutor, Martin Amidu in his epistle; “Plea to fellow citizens to use Representative Electoral democracy to vote for a new government of integrity on 7 December 2016”, accused John Mahama of diverting the $15 million EO Group funds into a private pocket. In his article, Martin Amidu disclosed that he was shocked to have learned the funds have been diverted shortly after the demise of late Mills.

“It was John Mahama (as the Vice President) who orchestrated the unlawful deal which I refused to endorse as the Attorney General at the time. It was Mahama who ensured that the $13million was paid not to the Government of Ghana for the benefit of the people, but into private pockets – which the late President Mills was shocked to hear shortly before his death,” he wrote.

In June 2018, Martin Amidu wrote to the CID requesting copies of the dockets on the diverted $15 million EO Group Funds. This covered an investigation that was initiated in 2011 and the Vetting Criminal Intelligence Analysis Unit under the CID was in charge of the investigations, with ACP Denis Ablade as the head.

But Amidu’s request was met with some disappointment as the CID replied to his letter stressing, they cannot trace the docket, and more especially that the investigator, Noah Bonny is deceased. Amidu couldn’t take that as an excuse and argued that the death of the investigator could not impede accessing the document.