By Discoverers_Gh (self media writer) | 7 months ago Politics in Ghana is becoming increasingly unbelievable in recent ttimes.An opposition party criticizes a ruling party so as to win votes and subsequently sworn into office but comes and perform worse, if not exactly as their predecessors and the cycle continues.

Ghana has gotten yet another shock of its economic history as the President Nana Addo Dankwa Akufo-Addo has ordered the Finance Minister, Ken Ofori-Atta to step up a flight to the International Monetary Fund (IMF) for a bailout of the Ghanaian economy.

This is not a bad move in its entirety but Ghanaians are shocked following the public backlash received by the erstwhile John Mahama administration especially from the then opposition New Patriotic Party (NPP) with Nana Akufo-Addo and Dr. Mahamudu Bawumia called at the time as "Economic Messiah" being the leaders of the critics. This was what Dr. Bawumia's posted on March 24, 2015 about the NDC government going to the IMF:

"Mr. Chairman, the IMF bailout was totally avoidable if the government had listened the sound advice from many quarters much earlier. But government refused to listen. They believed in their own propaganda and said, "Yentie Obiaa" (we wont listen to anyone). When government was cautioned about the scale of borrowing, the government responded that they would borrow more. Now that their propaganda has been exposed by economic reality, they are now forced to listen to IMF. We have moved from "Yentie Obiaa" to "Yebetie IMF Nkoaa" (we will listen to the IMF only)."

Find below the post as reposted by the Member of Parliament for Ningo-Prampram, Hon Sam Nartey George on his official Facebook page some hours later after the President made the unexpected statement to Ghanaians.

Meanwhil, today marks exactly another year Ghana became a Republic in 1960. And this is the present state of the country. 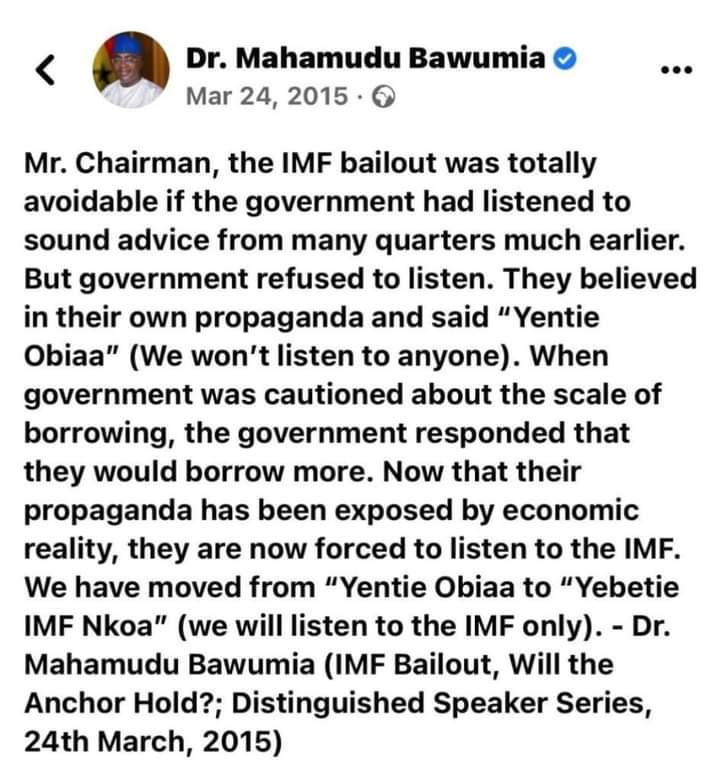