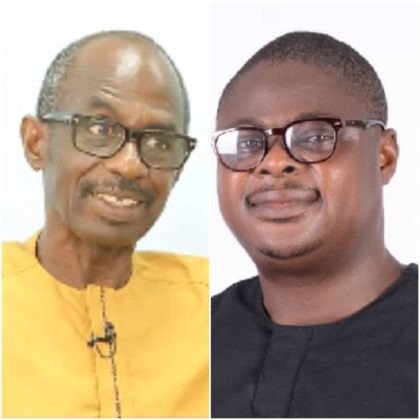 Picture of the general Secretary and the suspended communication team member

The party has described the indigenous party’s decision as “ not only prejudicial to the matter pending in Court, but that same violates the rights of a criminally indicted person to a fair trial”.

Rolihlahla Mandela, by name Madiba, (born July 18, 1918, Mvezo, South Africa — failed December 5, 2013, Johannesburg), Black nationalist and the first Black chairman of South Africa (1994 – 99). His accommodations in the early 1990s with South AfricanPres.F.W. de Klerk helped end the country’s intolerance system of ethnical isolation and steered in a peaceful transition to maturity rule. Mandela and de Klerk were concertedly awarded the Nobel Prize for Peace in 1993 for their sweats.

A statement released by the party’s General Secretary, Johnson Asiedu Nketia, cited the rules of natural justice and Composition 46 (1) (a) (c) (d) of the NDC Constitution as the base for its decision.

The Functional Executive Committee of the party at its meeting held moment, 13th October, 2021 took the view that the suspense of Mr Kwesi Dawood isn't only prejudicial to the matter pending in Court, but that same violates the rights of a criminally indicted person to a fair trial, the rules of natural justice and Composition 46 (1) (a) (c) (d) of the NDC Constitution which provides as follows;

(a) Admit complaints at colorful situations related to acts or deletions by PARTY OFFICE HOLDERS that constitute a breach of chapter eight on the Law of Conduct and the Correctional Law.

(d) THE LEADERSHIP OF THE NEXT Position shall deal with the report on the complaints as applicable.

It's apparent from the foregoing, that only the Functional Executive Committee at the public position of the party has the power to suspend an office holder of the party at the indigenous position.

Accordingly, FEC has quashed the purported suspense of Central Regional Communication Officer,Mr. Kwesi Dawood by the Central Regional Executive Committee of the party, as same is unlawful and without regard for due process.

As a law abiding party, we don't and won't blink crime of any form. Neither will we judge an indicted person unheard nor presume him shamefaced until proven innocent. Therefore, the Functional Executive Committee will abide by the decision of the Court hail the matter on the guilt or innocence of the indicted person, before we decide on whether or not he should be subordinated to correctional proceedings of the party.