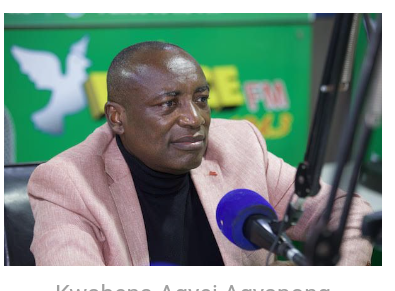 The ruling New Patriotic Party's (NPP's ), Former General Secretary, Kwabena Adjei Agyepong, has chastised his own administration led by His Excellency Nana Akufo-Addo for excessive ministerial appointments that he has stated categorically is making the running of government very expensive.

Mr. Kwabena Adjei Agyepong noted the use of two deputies Ministers by the ruling NPP administration wasn't needed and that they can survive with just one deputy. He further argued that even the whole Presidency has just one Vice. He therefore questioned why the Minister's have two deputies. According to him, the huge deputies Ministers is making the cost of running the government so expensive.

Mr Kwabena Agyapong stated that " I think every Minister should have one deputy. The President has one deputy who is his Vice. Why should the Minister have three? . . . it is making the cost of running government too expensive."

Mr Kwabena Agyapong noted that the nation can do with a maximum of 20 ministries with a suggestion that most of the current ministries can be merged.

He said "I think a country like Ghana can even survive with twenty(20) ministries, a lot of the ministries that have been chopped up should be consolidated.

[Video]: Bawumia Cannot Deny What I Am Saying - Johnny Hughes Drops Another Message To Government.

3 Reasons Your Angels Want You To Have Money in Abundance

I'm Not Surprised At The Ratings; We Should Accept That We're Facing Difficult Challenges