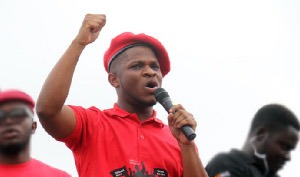 Public Communications Officer of the National Democratic Congress (NDC) is frustrated at the choice by Minority Members of Parliament (MPs) on Parliament's Appointments Committee to endorse Minister-assign for Defense, Dominic Nitiwul.

Sammy Gyamfi said he was stunned to the marrow when he heard the NDC MPs had succumbed to his [Nitiwul's] "restorative clarifications" on the viciousness in their fortresses during the 2020 general political decision.

"Individuals are horrified and disappointed with the choice on the grounds that the MPs have embraced Nitiwul who driven the foundation to threaten residents in our fortresses," he said in a meeting on Asempa FM's Ekosii Sen program Tuesday.

The predeterminations of eight pastoral chosen people hang in an equilibrium after the Minority dismissed three and mentioned five to return before the Parliament's Appointments Committee for additional scrutinizing.

Dismissal, Mr Gyamfi expressed, ought to be the destiny of Defense Minister-assign, Dominic Nitiwul.

"It doesn't impart the correct sign to the NDC, particularly in the Volta Region who were treated as peasants under the pretense of battling COVID," he seethed.

The NDC Communications Officer couldn't understand why the NDC MPs didn't dismiss him for sending warriors to Banda and Volta Region during the 2020 general political decision.

"I'm battling to settle concerning why our portrayal in Parliament will take such a choice. It has expansive impacts on individuals they are driving," he added.

Mr Gyamfi said the choice is exceptionally disliked and "conflicts with everything our majority have casted a ballot and worked for."