By Redeemer1 (self media writer) | 11 months ago 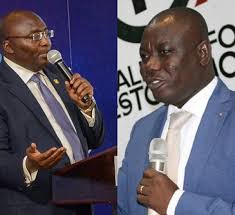 Your Relevance is on a downward spiral with your continued Engagement in theatrics.

I have sighted a video of Dr Mahamoud Bawumia addressing construction industry players in which he once again attempts to be a comedian for an important occasion.

Dr. Bawumia, you are the Vice-President and head of the Economic Management Team. There must have been some serious thoughts and considerations that went into the decision to invite you there as the Guest of Honor or Special Guest.

I am not sure, you were invited there to respond to H.E John Dramani Mahama's call on the rank and file of the NDC to be determined and vigilant at polling stations in the 2024 elections. The fact that you could not recognise the expectations of your audience, underscores your irrelevance and failure in foresight.

First and foremost, it is important to let you know that, HE John Mahama's message; *"Do or Die"* is targeted at the good people of Ghana and we are pleased that it has so far resonated well with them.

"Do or Die" is an English idiom with meaning. Please seek help from your dictionary.

Was it an attempt to play tricks and dodge the real issues of concern to your audience by playing diversionary jokes or a clear failure of thought on your part?

I have reasons to suspect that you either failed, refused or neglected to think about and speak to the fundamental issues causing the collapse of many construction companies, leading to an imminent collapse of the entire construction industry, creating unprecedented job losses and unmitigated economic hardships among others.

I noticed that you were at pains to blame Covid-19 and disruption of global supply chain as the cause of the near collapse of the construct industry but the truth is that the declining performance of the construction industry began in 2018, two clear years before 2020.

Remember that, those contractors you were addressing are owed over Ghc8.2 billion in arrears by Government as at the end of 2020 and a further Ghc1.9 billion by Cocobod, leading to a monumental indebtness to their banks and other creditors to the tune of over Ghc10 billion.

This is what your audience were expecting you to address, if you were minded to take them seriously. Not your failed comic show.

Again, do you need to be reminded that, as a result of Government's non-payment to these contractors, banks are facing huge systemic risks and existential threats with 17% of their loan books going bad in what is diplomatically called Non-Performing Loans (NPLs).

Ghana's banking sector is now at the brink of a crisis just two years after your Government wasted Ghc22 billion to kill the financial sector with a predatory regulatory motives.

Please get serious and deal with the bread and butter issues of contractors.

Any serious manager of this economy would have realised that the reason your projects are not being completed is because the industry players that you addressed are not being paid by your Government for works that they have done. Consequently, the banks see your projects; Purchase Orders (POs)/Contracts as worthless pieces of paper that are not worthy of being funded.

It is therefore not strange that we are in such dire financial challenges.

Your mismanagement of the economy has led to a huge gross financing needs of Government and quasi Government agencies and your audience (contractors) are completely crowded out of credit.

A Government that is in the domestic market on a daily basis competing with its citizens and contractors, looking for money to borrow.

In 2020, Government and its quasi agencies alone borrowed over Ghc207 billion from the domestic market. With this level of mindless appetite for borrowing on the local market, where do you expect your contractors to raise funds from to execute projects? More so, when their risks to the financial system has been elevated by your non-payment for their certificates.

It is obvious that the biggest pandemic that has collapsed the construction industry is not covid-19 but your monumental economic mismanagement that have resulted from your economic evils to the sector;

1. Excessive non- payments of contractors to the tune of about Ghc10 billion in arrears.

4. Crowding out of the construction industry and Ghanaian private sector from credit to fund their operations.

How are these evils of economic mismanagement attributable to covid-19?

That's why they could not laugh at your infantile jokes. Perhaps, if you pay your staggering debts to them, they will be able to attempt a laughter at your not so funny comic relief.

The worse you could have done was to take advantage of this session to offer them with something soothing in the absence of any verifiable action to address their concerns.

I can understand that sometimes, when one is verwhelmed by the magnitude of his own mess, he will always find comedy as a convenient cover to runaway from discussing them.

Electing to talk about H.E John Dramani Mahama, the man of the moment, can not be your escape route.

Perhaps, it is now dawning on you that, you have failed miserably with all those your numerous meaningless lectures that sought to malign Mahama.

You were very comfortable with *"All Die De Die"*. Please tell us what it means because it is not in any known English Dictionary.

No election in Ghana has ever led to the murder of citizens as many as in the elections that were supervised by your government to retain political power.

Are you not ashamed that, to date, you have not been able to gather the needed courage to condemn or utter a word regarding the dastard, brutal, callous, repressive and barbaric killing of innocent Ghanaians?

Dr Bawumia, you want to be a presidential candidate on the ticket of NPP. Your main challenger, Hon Alan Kyeremateng has condemned the Suhum violence. I challenge you to be bold enough to condemn it. I further challenge you to condemn all the extrajudicial killings of 2020 and 2021 and join the venerable John Dramani Mahama to call for an immediate arrest, prosecution and punishment for the perpetrators of the dastardly actions.

Your are fast becoming a walking contradiction of violence that hides behind silence to condone and encourage violence and regressive conduct.

As you urged those who didn't win awards not to make it a 'Do or die' affair, did you ask them if any one of them was murdered in their service to the nation to seek recognition to win the awards as was the case in the 2020 elections?

Fortunately, your dry joke about the election petition did not even amuse your audience who have demonstrated to be right-thinking Ghanaian businessmen and women who will not be dragged into your infantile political comedy on a serious professional private sector-led event.

It was not surprising that the comedian laughed far more than his audience. A clear indicator of failed comedy.

Stop the comedy when you are invited to speak on very important private sector-led professional events.