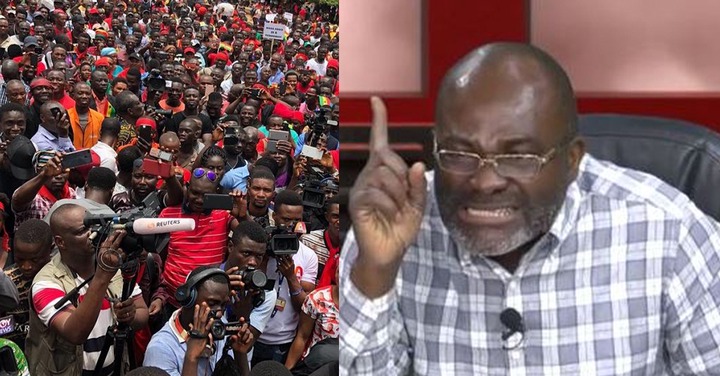 Assin Central Member of Parliament, Mr. Kennedy Agyapong has called on the President to sack the Chief Executive Officer of the National Identification Authority Professor Kenneth Attafuah else, he will organize a mammoth demonstration against him. Speaking in an interview with Philip Osei Bonsu on the Ekosii Sen program, Mr. Kennedy Agyapong indicated that Professor Ken Attafuah has caused great damage to the party and must pay for it.

Professor Ken Attafuah is on record to have indicated that the President has commanded him not to employ any member of the New Patriotic Party in his entity. “The president does not want to leave a legacy where party members will be part of the registration process. The President charged me to make sure no party executive is hired in the process. He wants us to build political neutrality in the party”. Professor Attafuah indicated.

His comment has sparked a huge reaction from the public including Mr. Kennedy Agyapong. The legislature is angry and indicates that Professor Kenneth Attafuah is not being truthful. He indicates that Nana Addo Dankwa Akufu Addo will never issue such a statement.

“Even if that was what the president said he must not come to the public to repeat it. I have the common sense to make him look ridiculous. He should tell me if his position is politically neutral. Former President Kuffour created the NIA and NDC took it off. So when the NDC was in Power, Professor Attafuah had no position, NPP came and that position was brought back. You can’t say Akufu Addo does not want party members to be employed. Professor Attafuah should bring political neutrality people to do the campaign in 2021”. He indicated.

Mr. Kennedy Agyapong added that what Professor Attafuah said is dangerous to the party and the base is very angry. What they are doing to us is dangerous. What I will do to this professor Attafuah today, he will be sorry. I will insight every NPP member who is unemployed against this man. If Akufo Addo doesn’t sack him, there will be demonstrations all over the party. I know Akufo Addo will never say that. If that was the statement then we have taken a lesson from it”. Kennedy Agyapong added.