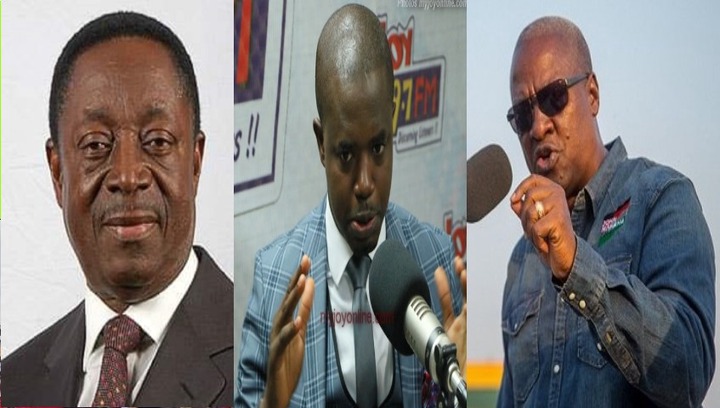 An aide to former President John Dramani Mahama, who doubles as a member of the legal team for the National Democratic Congress (NDC), Edudzi Tamakloe Esq., is pleading with Dr. Kwabena Duffour to reconsider any intention to contest the party’s flagbearer position for the 2024 general election. Mr. Tamakloe argued that any aspirant for the flagbear-ship other than John Mahama should conduct some introspection before filing to contest the internal party election which is scheduled for 2023.

On Okay FM’s Ade Akye Abia show with Kwame Nkrumah Tikese, the politician noted that it would be a mistaken belief for Dr. Kwabena Duffour and his caucus would have any chances against John Mahama in the internal elections. The Daily Post had reported that Dr. Kwabena Duffour stands to rival former John Mahama to lead the NDC for the next election, a development that had sent some uneasy calmness in the camp of the former president.

Reacting to this news, Edudzi Tamakloe urged the astute politician and former Finance Minister [Dr. Duffour] to reconsider his intention to contest the election. He mentioned that any candidate other than the former flagbearer, would campaign on the accomplishment of John Mahama if they ever want to win the 2024 election against the New Patriotic Party (NPP).

He mentioned that it makes sense to have John Mahama lead the NDC in this instance, adding that “If the person that did the thing is there why would you want somebody to come and campaign on it?”

Mr. Tamakloe emphasized that even if anyone such as Dr. Kwabena Duffour should contest John Mahama or the flagbearer position, it must not be for someone’s hatred r dislike for the latter. He noted that the election should be contest with purpose on not on grounds of settling some scores.

“It shouldn’t be for some hatred or dislike for someone that he should contest him.”

He continued with some advice for Dr. Duffour to re-examine his chances contesting the election before he commits to the process.

“He is politically astute and knows the dynamics of our internal politics. He should ask himself a simple question, that is it right to contest John Mahama…just because of someone’s hatred for the latter?

“There is a certain political wisdom that is always required. He personally has to do his permutations and calculations before he takes a decision. I am convinced that after those deliberations he will surely conclude that it is not worth it.”