The Interior Minister warns factions in Bawku to engage in conversation to settle disputes.

In order to speed up development, residents of Bawku in the Upper East Region have been urged to use dialogue to end the long-running conflict there. 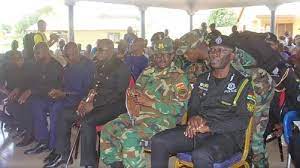 Ambrose Dery, the interior minister, claimed that the existing state of affairs was an indictment of the current generation and added that they would be held accountable by posterity if they left Bawku in a worse state.

"I must advise you that you must not pass on to your offspring a worse Bawku than what your parents left you. I beg you to allow for peace so that you can leave a successful and peaceful Bawku for your children to inhabit.

When the minister led a powerful group to Bawku last Saturday to engage with the Kusasi and Mamprusi leadership and discuss steps to ensure long-term peace in the region, he was speaking.

We're here to ask you to give us a chance to bring about long-lasting peace in Bawku for the good of everyone, he said.

Dominic Nitiwul, the Minister of Defense, Dr. George Akuffo Dampare, the Inspector-General of Police (IGP), Stephen Yakubu, Vice-Admiral Seth Amoama, Chief of the Defence Staff, Adam Bonaa, Amadu Hamza, the Chief Executive of the Bawku Municipality, and others were with Mr. Dery.

The Bawku Naba, Zug-Raan Naba Asigri Abugrago Azoka II, and his elders, Mamprusi elders, and Kusasi and Mamprusi youth groups were all addressed by the delegation.

The team "has come here to tell you that we need absolute peace in Bawku so that people can return to their normal lives," the minister said of the visit.

"Unfortunately, you are unable to live your lives freely because of the current situation, which necessitates the maintenance of the curfew.

We guarantee that if you use the peace pipe, we will promptly examine the recent restriction on tricycles, also known as "yellow yellow" vehicles, which are the most common mode of transportation in this region.

But if you insist that all you are familiar with is conflict, he continued, "we will be forced to extend the curfew hours if that is what you desire."

According to Mr. Dery, using violence in response to even the slightest provocation is regretful and hinders the development of the commercial town, furthering the plight of the populace.

He noted that while Kusasis and Mamprusis had lived together for a long time and that many of them had intermarried, it was concerning that they still fought, which worsened their insecurity and had an impact on their social and economic lives.

"We beg you to lay down your weapons and give peace a chance so that social and economic lives will be brought back to the once thriving Bawku," Mr. Dery declared on behalf of President Nana Addo Dankwa Akufo-Addo.

Youth leaders from the Kusasi and Mamprusi youth groups vowed to lay down their weapons for the sake of peace because, in their opinion, the ongoing hostilities were badly affecting their daily lives.

However, they urged the government to reconsider the ban on tricycles because it was limiting people's freedom of movement and making it more difficult to transport goods to market centers.

Due to the deteriorating security situation in the area, the Upper East Regional Security Council banned the usage of motorcycles in the Bawku municipality and its surroundings in January of this year.

Additionally, the government outlawed the possession of firearms, ammunition, and other offensive items there.